A Treasure Trove of Art 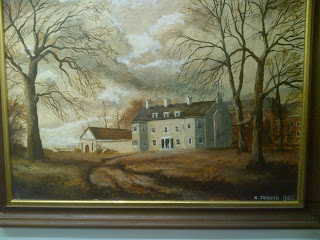 Our Lady's Nursing Home, Falls Road By Kieran Trainor
The west Belfast Féile an Phobail is a remarkable community based enterprise. It never ceases to surprise and amaze me. This year marks 25 years as a thriving peoples’ festival. Over that time great playwrights’, poets, singers, writers, actors and extra-ordinary citizens have showcased their talent.


As a founding member and as a director of Féile I have had the pleasure to meet many of them. Sadly this week I opened an exhibition for one local exceptionally talented artist who tragically died very young but who left behind him a breath taking collection of paintings, drawings and sketches.


Kieran Trainor was born on October 19th 1964. He grew up in Beechview Park, just off the Whiterock Road, not far from where I lived in Ballymurphy.


Like most of his contemporaries Kieran attended St. Thomas’s Secondary School on the Whiterock road. But his talent was clearly recognised and he sat his A Level art at the early age of 16. Kieran achieved the joint highest grade for A Level art in the north that year.


The exhibition of his work is part of Féile an Earraigh – the Spring Festival of Féile. It is being held in An Cultúrlann and will run there, in one of the exhibition rooms upstairs, until the weekend.


If you get a chance go and look at it. If like me you are from the area you will recognise Our Lady’s Nursing Home, which was out Kieran’s back door, as well as the City Cemetery, St. Peter’s Secondary School, and the Falls Park. Our Lady’s is now part of the Meanscoil.


Some of the local scenes – like the plots – are long gone due to redevelopment. Kieran liked to paint these and the old house on the Giant’s Foot.


The British Army fort that occupied McCrory Park was right outside his front door and he painted it too.


Kieran went to Belfast Art College where I’m told he made a great impression on his tutors and fellow students. He was a prolific artist. His friend Brendan says Kieran loved landscape painting and painted in the style of the English painter Constable who he greatly admired, and could produce several paintings day.


Kieran was not keen on the abstract expression that was the norm in the Art College of that time but he studied for and achieved his BA Hons in three dimension design. He went on to work for several of the most important architectural practices in Ireland at that time.


Kieran was also a talented musician and was a founding member and guitarist in St. John’s Choir in Whiterock which I used to listen to on a Sunday at Mass there.


Tragically Kieran was killed in an accidental fall while living in Newry in 1997. And that could so easily have been the end of his story. For the next 15 years his paintings lay under covers in the family home. 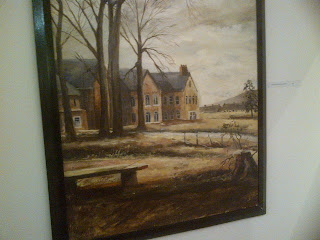 However, last year two of his friends Brendan and Matt went into the attic and undercovered this treasure trove of art work. They then had the great good fortune of taking some of them to an exhibition which Margaret McKernan had organised during last years’ Féile. Margaret immediately recognised the quality of the work and this year helped organise another art exhibition but this time of Kieran Trainor’s work.


Margaret was so captivated by the paintings that in her email ordering me to open the exhibition she described how Kieran’s work is ‘amazing, capturing the light and applying various mediums to produce such great art.’ It was, she said ‘so based on who and what Féile is about I had to make space.’


And she is right. This exhibition is exactly what Féile is about – providing a space for a local artist to exhibit his work. Regrettably Kieran is not here but his sister Colette was at the launch on Monday night. She had loyally protected and kept safe her brother’s work and she was now present to see it put on display.


Looking at Kieran’s paintings I was reminded of another west Belfast artist, Gerard Dillon who lived in lower Clonard Street. Gerard’s work is now eagerly sought and he is a world renowned artist. But although he spent his later years in Connemara he never forgot his roots.

In 1969, Dillon withdrew his work from the Belfast leg of the Irish Exhibition of Living Art. In a letter to the Irish Times on August 20th only days after loyalist pogroms in Belfast he protested at the 'arrogance of the Unionist mob'.


So, if you have a wee bit of time drop into the Culturlann and marvel at the talent of a local artist who will now be remembered for the great artist he is. 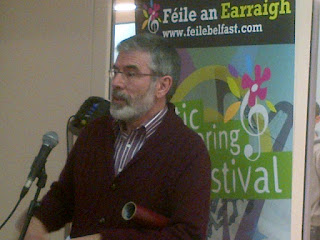 Féile an Earraigh
Posted by Gerry Adams at 5:28 PM