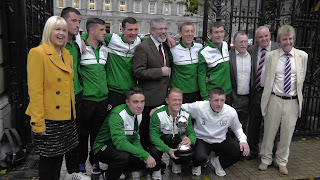 I have to admit that I have never heard a lot about the Homeless World Cup. Have you? But that changed for me on Tuesday when the Irish team that participated recently in Mexico City visited the Dáil for an event hosted by two Sinn Féin TDs Sandra McLellan and Desi Ellis.

From late September through to this month over 700 homeless men and women, representing 59 teams, arrived in Mexico City from 55 countries around the world. The tournament has a competition for men and one for women. It ran over nine days between the 6th and 14th of October. It was won by Chile who beat Mexico 8-5. The Mexican women’s team won their competition defeating Brazil 6-2. 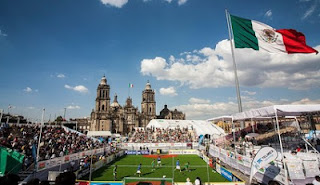 The competition was held on a field constructed in the Zocalo. This is the historic main plaza or square in the heart of the City. The Zocalo has been a focal point of gathering for people since the time of the Aztecs.

The Homeless World Cup was founded 11 years ago in 2001. It draws support from tens of thousands of homeless people and NGOs (non governmental organisations) around the globe and seeks through sport to motivate and encourage homeless people to see beyond their difficulties. Its objective is to raise awareness around issues of homelessness, poverty and inequality.

Regrettably the tournament did not receive the attention in the Irish media that it deserves. But elsewhere, including in Mexico where as many as 50,000 spectators turned up for some of the matches, there was extensive coverage.


The organisers have set themselves the goal of involving one million people across the world in 100 nations in the next two years.
The Irish team was drawn from Street League teams participating in the all-Ireland tournament in Dublin. Street league was established in 2005, although the first Irish team took part in the Homeless World Cup in Austria in 2003.

The homeless magazine Big Issue was the driving force behind the establishment of Street Leagues across the island and there are now street leagues in Cork and Galway and Waterford, Portlaoise, Belfast and elsewhere.

Hundreds of young people are involved and a variety of tournaments are run throughout the year culminating in the all-Ireland Tournament in Dublin. The young people who participate are homeless, or drug and alcohol dependent individuals in rehabilitation, or ex-offenders, the long term unemployed with identified learning disabilities, or refugee and asylum seekers.


The purpose behind the Street Leagues is to build self-esteem, and self-confidence, and to provide the young people with the basic tools necessary to help them in the future.
Sean Kavanagh from Irish Street Leagues has expressed concern about the future of the project in an environment where there is less money being raised to run the program. He pointed out that in the south it takes about ‘€80,000 to keep someone in prison for a year. If I had that regular income along with the money we raise from fundraising activities I could secure the future of the leagues and just think for a moment, if only one of the many lads participating in the leagues turned his life around, just think of the benefits to him, his family, friends and the community.’

The Street League is an inspirational programme. It and all those who make it possible, deserves our support and thanks for the great work they do.


The reception in Leinster House was attended by Minister Michael Ring. Following an intervention  by Sandra he agreed to meet Sean Kavanagh to discuss the issue of future funding. 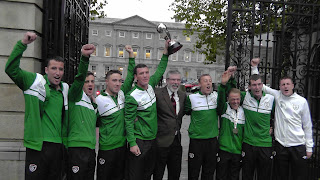 As Desi Ellis said the Minister also needs to consider hosting the Homeless World Cup. Such an event would mark a real commitment. It would be an initiative that would build confidence and lift the morale of homeless people everywhere. It would also be a major tourist event. And a world cup that we could win.
Posted by Gerry Adams at 9:31 AM

Hello Gerry,
Was just reading on the documentary film :Kicking It (2008)
The film has been seen as an effort to expose the experiences of homeless people to the wider audience. The Homeless World Cup as a centre piece to make people more aware of the hardships people go through daily. http://www.boyoutube.com A DOCUMENTARY about the Homeless World Cup