Sunday was the last day of the News of the World. It was the biggest selling Sunday newspaper in Britain. It thought it made the rules. And for much of its 168 years it did.

It was a paper which specialised in sex, politics, drugs and celebrity scandals. And it didn’t care who it hurt in seeking to sell papers.

As part of the Murdoch media empire it was ruthless and merciless in pursuit of the exposé.

But last week it became of the latest victim of that same exposé culture it had dominated for generations.

The accusations being levelled against it are straightforward.

It hacked phones for stories - to sell more papers - to make more money. But the British public’s appetite for sensational stories of political corruption, the sexual indiscretions of celebrities and the exposure of sporting cheats, drew the line at listening in on the traumatic personal calls of bereaved British military families and terror and murder victims. There are also allegations that tens of thousands of pounds were spent on bribing police officers.

According to the Chief Executive of News International worse is to come.

The British government rushed to limit the damage. So, two enquiries have been ordered by the British Prime Minister, who is himself mired in the controversy because he hired Andrew Coulson, the former boss of News of the World, when some of this was going on.

This blog has watched this story unfold with interest in recent days. It has dominated much of the news reporting in Ireland and was given a new twist when Murdoch closed News of the World.

But there is another part of the story. It is to be found in the arrogance and hypocrisy and jingoism of significant elements of the British media establishment.

The exposure of News of the World, which is largely down to the dogged determination of a small number of journalists, is now being extolled as an example of the British media getting it right! They are busy clapping themselves on the back claiming this is an example of the high standards of British journalism in the pursuit of truth and justice.

There are many in Ireland who would strongly disagree. Whatever the truth about the events at the News of the World British the record of the Britisdh media in Ireland was disgraceful and shameful.

With a few honourable exceptions most of the British media set aside the laudable objectives of truth and justice and willingly bought into the British state’s version of events in Ireland and in doing so undoubtedly contributed to the duration of the conflict.

Britain’s counter insurgency specialist in the early 70’s was Brigadier Frank Kitson. He brought to the north of Ireland his experience of counter-insurgency actions in a host of former British colonies from Kenya to Cyprus. Kitson argued that to win against a guerrilla enemy which had the support of its community, or at least a significant proportion of that community, one needed to reshape the government, the judiciary, the law, the police and the media, as well as government policy.

According to Kitson: “The law should be used as just another weapon in the government’s arsenal, in which case it becomes little more than a propaganda cover for the disposal of unwanted members of the public.”

This needs a compliant media and an effective disinformation programme. In a British Ministry of Defence documents in 1974 entitled, ‘An introduction to Psychological Operations’, it states:
“Psychological Operations (Psyops) is an all-embracing term defined by NATO as ‘planned Psychological activities in peace and war directed toward the enemy, friendly and neutral; audiences, in order to create attitudes and behaviour favourable to the achievement of political and military objectives …”

Media coverage of the conflict was an integral part of Pysops and black propaganda. It was also expensive. In 1989-90 the British government spent £7.238 million through its ‘Northern Ireland Information Service’ for a population of 1.5 million as against £1.1 million in Scotland by the equivalent office for a population of 5 million. And this did not take into account the money spent by the British Army or the RUC.

The fantasy stories; the lies; the willingness to carry as fact British Army and RUC accounts of events; and the refusal to investigate illegal actions by British state forces, are all legendary.

Scores of programmes were banned. The internal rules within newspapers and broadcasting companies for covering Ireland and the political bias of these ensured a large degree of self-censorship. And for a time after October 1988 this took on the form of formal censorship. It was about criminalising a whole community.

The Murdoch ‘Sun’, which it is speculated will soon publish a Sunday edition to replace the News of the World, carried a typical piece of psyops as far back as 1971. Under the title ‘Front Line Kids’ it was claimed that ‘IRA leaders here are sending their shock troops to war – their own children. Bomb throwing eight year olds are in the front line. They steal out at dusk to play games with death, trained to hate and kill. And the children at war chant obscenities to nursery rhyme tunes as the bullets fly.”

But much of psyops was given over to presenting the conflict as sectarian and excusing the killing of civilians by British forces or their loyalist allies. Collusion was generally ignored.

Depending on the target audience Republicans were accused of being either ‘criminals’ or ‘godfathers’ – or Marxists trying to create a communist dictatorship in Ireland.

And the underlying racism of much that appeared about the Irish was evident in stories like that produced by the Daily Express in October 1976 which claimed that Irish people in Britain were leading a £200 million social security swindle and that millions were finding their way to the IRA. 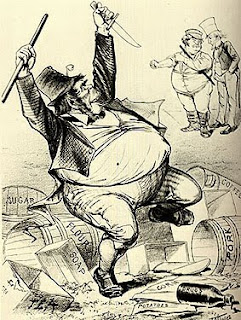 It was a reminder of the attitude of British newspapers of the 19th century. Mostly famously expressed in the Punch cartoons of the period which depicted the Irish as ape like, with low foreheads and Neanderthal features.

It’s not about truth. It’s not about justice. It’s about selling papers, making a profit and backing the status quo.
Posted by Gerry Adams at 4:46 PM

A real story of interest to me Gerry,
Without Truth there is no Justic. The compliant media and an effective disinformation programme at work, on a every day system. This is arrogance of the highest form. The film maker Federico Fellini was right when he said: "Censorship is advertising paid by the government."
The standards of British journalism is a real disgrace, when you set aside truth for occupation. The one statement on truth I like to expose is by george Orwell :"During times of universal deceit, telling the truth becomes a revolutionary act."
To seek the truth is a most revlutionary of all acts, that is a message to tell.