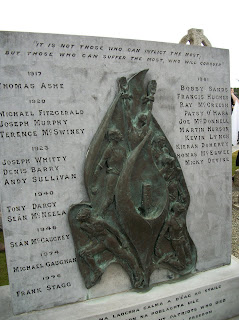 The Hunger Strike Memorial in Glasnevin

Saturday morning this blog spent a short time at the west Belfast count in the Kings Hall in south Belfast. As anyone watching the media coverage of the Assembly count will know the process of validating and counting and transferring preferences was unbelievably slow.

One BBC journalist I was speaking to joked that Scotland would have independence before the count was completed in the north. I will return to the issue of the elections in my next blog.

From Belfast it was down to Tallanstown in County Louth. It’s a small, beautiful, sleepy village which has a monument to Vere Foster who founded the Irish National Teachers Organisation and in the nineteenth century promoted the provision of education, helped establish schools and provided funds for thousands to flee Ireland as a result of the great hunger. Foster’s family were from the locality.

Tallanstown has won the 2010 Tidy Towns competition and President Mary McAleese was there to congratulate residents and join in the celebrations. There were hundreds of local people in attendance as the President praised the efforts of all of those who had worked very hard over many years to achieve this award. Well done indeed.

From there we drove to Dublin where Mary Lou McDonald was opening her new constituency office at 139 North Strand for Dublin Central. She told me that the building was in a very bad state of disrepair but that the local organisation had rallied round and spent the last 6 weeks plastering, fixing ceilings, rewiring and painting the office. It looks well now. Comhghairdeas. 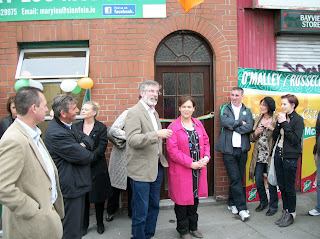 And then it was on to Parnell Square. Dublin Sinn Fein had organised a march from the Garden of Remembrance to the Hunger Strike monument in Glasnevin Cemetery to mark the 30th anniversary of the death on May 5th of Bobby Sands.

It was a balmy day which occasionally threatened rain. There was a good turn out of Dubs and the hundreds who took part were in fine form as the news of the election results from the north were texted to mobile phones from count centres there. 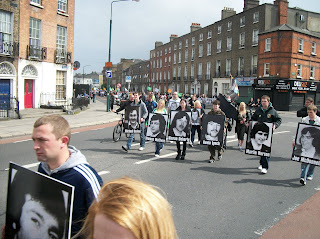 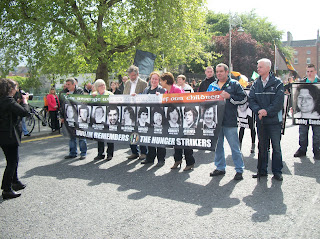 Glasnevin is a remarkable place. The hunger strike memorial is dedicated to all of those who died on hunger strike in prison beginning with Thomas Ashe in 1917. Ashe’s grave lies just a few feet away. At the time of his arrest in September 1917 Ashe was President of the Irish Republican Brotherhood and had been Officer Commanding Dublin's Second Battalion during the 1916 Easter Rising.

Like Bobby Sands and his comrades Thomas Ashe, Austen Stack and others rejected British efforts to criminalise them and embarked on a hunger strike on September 20 in Mountjoy prison. Five days later Ashe died after being brutally force fed.
The death of Thomas Ashe and the subsequent funeral procession became a rallying call to the Republic. His body lay in state in Dublin's City Hall before a funeral procession of over 30,000 marched here, to Glasnevin Cemetery, on 30 September 1917.

94 years later Irish republicans were again gathered about his grave to commemorate and celebrate the lives of another generation of republican activists who died on hunger strike.

All around the small platform from which the ceremony was conducted, lie the graves of other Irish iconic historic figures. Men and women who fought and died in pursuit of Irish freedom. 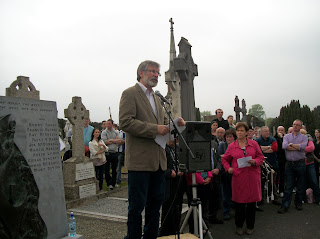 In my remarks I reminded everyone present of those others, who with Bobby, had died on hunger strike in 1981 and earlier in this phase of struggle:
Francie Hughes, Raymond McCreesh, Patsy O Hara, Joe McDonnell, Martin Hurson, Kevin Lynch, Kieran Doherty, Tom McElwee and Michael Devine, and also of Frank Stagg and Michael Gaughan, who died on hunger strike in English prisons.

It was a poignant day. A day full of memories for those of us who knew Bobby and the other hunger strikers. And when the news came through that Sinn Féin had won three of the six seats in Fermanagh South Tyrone on Bobby’s anniversary I found that an especially emotional moment. 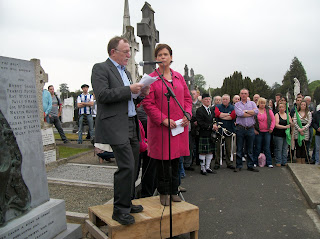 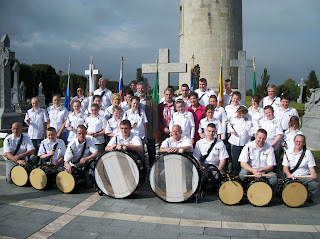 Hello Gerry,
Less we forget -The Guinness Book of Records lists the world record in hunger strike (without forced feeding) as 94 days, which was set from August 11 to November 12, 1920 by John and Peter Crowley, Thomas Donovan, Michael Burke, Michael O'Reilly, Christopher Upton, John Power, Joseph Kenny and Seán Hennessy at the prison of Cork. Arthur Griffith called off the strikes after the deaths of MacSwiney, Murphy and Fitzgerald.
If one keep note of such things.
I hope that no other Irish man or women will every have to Hunger strike in a English prison for freedoms rights. Patriotism and objectives give upliftment in principles of the hunger strikes.

A forest of graves. As the rows were like this, of trees
but it has nothing to do with nature, unless you want to count human nature.