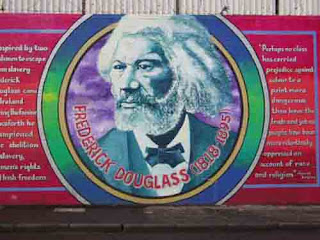 However far this blog travels there are connections to west Belfast to be found everywhere, usually in the people I meet.

Like the man from Lenadoon, who left Belfast when he was five for Canada. He used to come back each year to visit family in Beechmount where he met me at the age of 14 as I was campaigning in an election. Today I met him again in a hotel in New York. He was here for a hockey game.

Sometimes the connections are through former political prisoners from west Belfast who are to be found in all parts of the globe or former residents who emigrated but have never forgotten their home and are proud of where they came from.
And occasionally the connection is surprising and the coincidence startling. For example.

On St. Patrick’s night I attended the traditional St. Patrick’s Day White House event hosted by President Obama. The place was packed. There were a few of us from Ireland, including the Taoiseach. But this was a night for the hundreds of Irish Americans from all parts of the USA who had been invited to be the President’s guest for the evening. There were State Governors, business people, politicians, lawyers, community activists and many others. They were having a great time.

And then President Obama made his speech in the course of which he too spoke about connections; the connections between Ireland and the USA. And he cited the example of Frederick Douglass, a black writer and speaker and political activist, who escaped the brutality of slavery and wrote a best-selling book about his experience.

The book was called a ‘Narrative of a life of an American Slave’ and it was published in 1845. Fearing for his safety Douglass’ friends persuaded him to travel to Ireland and Britain. He spent four months in Ireland where he addressed packed meetings and told of his experience as a slave. He was befriended by Daniel O’Connell who was then at the height of his power as the ‘great liberator’.

In his speech President Obama said: “O’Connell was a fierce opponent of slavery, and he began calling Douglass “the black O’Connell of the United States.”

The President also described how Douglass “quickly found common ground with the people locked in their struggle against oppression”.

What’s the connection with west Belfast? For a very long time one of the most evocative images on the international wall of murals on the Falls Road was one of Frederick Douglass!

But the coincidences didn’t stop there. Todd Allen, a good friend from Jersey, was in Washington with our group. He told me afterward that his friend Don Mullan, who many readers will know wrote a definitive book on Bloody Sunday which was subsequently turned into a very successful film, is currently involved in a project to have a statue of Frederick Douglass erected in Cork.

Don joined us after the White House event and told us of his hopes and efforts to erect the Douglass statue and his intention to republish Douglass’s book. For that he would like to use a photo of the west Belfast mural on the front cover but when he went recently to photograph the mural it had been replaced temporarily by one to mark the hunger strike anniversary.

This morning this blog rang my good friend Danny D who painted the mural. Danny has a photo but likes the idea of repainting the Douglass mural to mark the visit to Ireland in May of President Obama.

And for those of you who are interested in Frederick Douglass it would be worthwhile going onto the internet and reading about the extraordinary life of former slave who contributed significantly to the campaign to end slavery in the USA but who also spoke out against discrimination against women and native Americans and who understood the importance of education and equality in any society. Better still when Don republishes it to get a copy.

His is an astonishing story of how determination and courage and conviction can overcome great obstacles and brutality and how one person can make a difference to the wellbeing of citizens.

So when you watch President Obama on his visit to our country have a look at Danny D’s new mural of Frederick Douglass and of how Douglass made a connection and “found common ground with the (Irish) people locked in their struggle against oppression.”
Posted by Gerry Adams at 6:30 PM

Great story Gerry,
Happy that you commented on Frederick Douglass, read the story on St. Patrick’s Day White House event hosted by President Obama.
"Patriots have toiled, and in their country's cause Bled nobly; and their deeds, as they deserve, Receive proud recompense." There is a Frederick Douglass monument at Rochester, N. Y., unveiled June 9, 1899,being the first monument erected by popular contribution, to the memory of an Afro-American statesman. Frederick Douglass is not dead, in a way. His grand character will long be an object lesson in history.Rochester ,N.Y. was were Douglass he began the publication of a paper known as the "North Star," an organ devoted
to the abolitio of slavery. A newspaper, devoted to the cause of Liberty, Humanity and Progress.