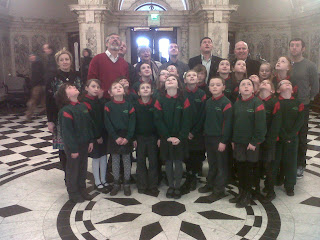 Getting our pic taken in City Hall

On Thursday evening this blog called into the Dundalk Institute of Technology where gaeilgeóirí where holding an event to mark Seachtain na Gaeilge – the week of Irish – which this year began on March 5th and concludes, as it does each year, on St. Patrick’s Day next week.

The following morning I was in Belfast City Hall where a series of events had been organised to also mark this unique celebration of the Irish language. The choir from Bunscoil Phobal Feirste on the Shaws Road in West Belfast where there and treated us to some beautifully sung songs in Irish and young people from the Meanscoil joined us later.

At one point a group of tourists who were being show around the City Hall were invited in to listen to the children. They thoroughly enjoyed it.

Seachtain na Gaeilge is a non-profit organization which was set up in 1902 by Conradh na Gaeilge. Its objective is to promote the use of the Irish language in Ireland and overseas. It does this by organizing a festival each year, ending on St. Patrick’s Day.

This year events began on March 5th. They take place all over the island and in Britain, the USA and elsewhere. The events themselves vary enormously and include music, cultural events, street céilís, sporting events, and much more.

This blog is very enthusiastic about the language. I enjoy being able to speak Irish and to read it and have even written some poems in Irish. I am not as fluent as I would like but now that I will be spending several days each week in the Dáil this blog will be signing up for the Irish language classes that are run there.

Like every language or sport or skill the key is sticking at it. I use Irish on every occasion I can. And as those I rely on to keep me right with my pronunciation and understanding keep tell me, it can be difficult but the hard work is worth it when it all comes right.

There are several Irish medium schools in Louth and West Belfast, which has a thriving Gaeltacht quarter, has witnessed enormous progress in recent years.
But there is still a lot of work to do.

So, make sure you make best use of the census when the opportunity arises to fill it in. Plans by government departments, particularly in respect of education will be shaped by the census results.

And, if you see any Seachtain na Gaeilge events on and are interested in the Irish language, even if you don’t’ have any words or just a cuplá focal, drop in and participate. You won’t regret it.

This blog has learned with great sadness of the death at the weekend of Brian Moore.

Brian will be best known to most republicans as the irrepressible and politically perceptive cartoonist Cormac who for many years was a regular feature in Republican News and then in An Phoblacht/Republican News after the papers merged.

His weekly contribution to the paper touched on the big issues of the time; the war, repression, sectarianism, collusion and much more. His cartoons lampooned the British Army and RUC; the British government and media. If he witnessed injustice he turned his satirist’s pen loose.

His cartoons were incisive and funny. And for many readers the back page was the first they read to see what gem ‘Notes by Cormac’ held for them.
Brian was a republican and a socialist. He supported the struggle for freedom and the peace process.

In the 70’s he published political comics and he contributed to other publications, including the British weekly Socialist Challenge and Fortnight magazine.

Brian was also a song writer and performer. He founded ‘The People of No Property’ with whom he sang.

His death is a huge loss for his family but also to the wider republican community.

On behalf of Sinn Féin and of republicans everywhere I want to extend my sincerest condolences to Brian’s partner Máire and their son Cormac, to Máire’s son Conor and Brian’s brothers Gerry and Danny and his sister Maura, and his family circle and friends. Go ndeanfaidh Dia trocaire air.

Here are just a few of his cartoons. 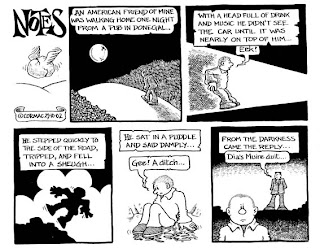 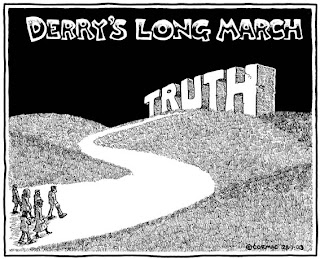 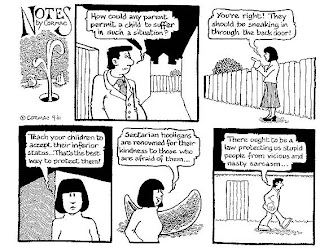 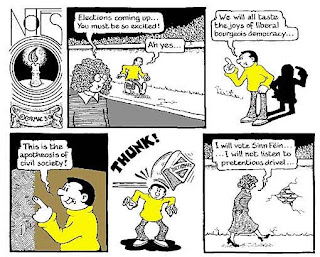 A happy week of Seachtain na Gaeilge, and St. Patrick's Day. This should be a very special trip this year to the Washington.As this Marks so much a change in Irish social political views. With this Celeration of Irish life and language come Irish wit and humor ,as well. As for wit, your are a good Profile in Courage on this subject. When the elephants fight, the grass suffers. -- African proverb. The Graphic Witness of our time set down so well in partisan journals,and popular magazines or in underground comics, give a true light of history of political and social caricature that understood about this world. Artist giving a face to a world not given a voice ,always a loss.
A good trip to you Gerry, nice post