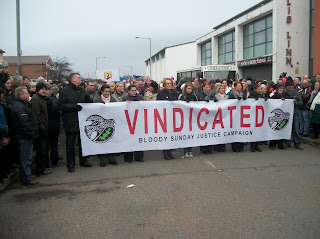 It was bitter cold in Derry on Sunday for the Bloody Sunday march. There were thousands of people there in solidarity with the families and in celebration of the lives of those killed and injured almost four decades ago.

It was a poignant and emotional day for many people. The families of those murdered have decided that this will be the last Bloody Sunday march. So, Sunday was about completing the journey begun in the Creggan in January 1972.

Bloody Sunday was a turning point in Irish history and a personal crossroads for many thousands of men and women.

This blog wants to commend and congratulate the families of the 14 who were killed and those who were injured, their friends and neighbours, the citizens of Derry and the countless others around the world who together, courageously and relentlessly campaigned for truth and for justice for the victims.

Their efforts made the Saville Inquiry possible and its report published last June represents a huge achievement.

It was an extraordinary campaign for truth and justice and a remarkable victory in the face of official cover-up and lies, of misinformation, ridicule and threats.

Widgery tried to blame the organizers of the march. He tried to blame the IRA. He declared their deaths at the hands of British paratroopers to be legitimate. Saville exonerated the victims, declaring all those killed and wounded to be unarmed and posing no threat whatsoever to the British soldiers who shot them.

He also removed any responsibility from the Civil Rights Association and ruled out any suggestion that the IRA or members of the IRA had taken any action that precipitated events.

Saville admitted British soldiers fired the first shot and continued firing without any provocation. He dismissed notions that those who opened fire panicked, acted out of fear or confusion.

Their killing and wounding of unarmed civilians was “unjustified and unjustifiable,” he said. Widgery had blamed the people of Derry, nationalist and republican. Saville declared them innocent.

Having led the campaign for justice for 29 years it was right and fitting that Sundays march was led by the families walking behind a large banner proclaiming – VINDICATED. 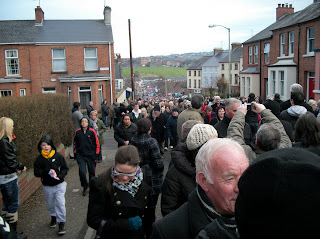 It was a long march with occasional spats of chilly rain. When we eventually reached the Guildhall Square the Guildhall itself is hidden behind scaffolding and tarpaulin for renovation. So, the platform was set with its back to Shipquay Road. The thousands packed into the square and the families took centre stage in front of the platform holding their loved ones photographs up for all to see.

A flute player from one of the bands was to play Amhran na Fian but whether it was nerves or a problem with the flute the notes simply wouldn’t run true. He tried several times but to no avail. The crowd appreciating his situation clapped in support and John Kelly asked someone to come forward to sing our national anthem.

Your man pushed me forward and along with Frances Black and our fluter comrade, and to the loud accompaniment of the crowd, we proudly sang Amhran na Fian.

The speeches reminded the crowd of how much had been achieved but also reminded us all of the work still to be done in achieving justice and truth for families. Brid Voyle gave an emotional, moving speech of the events in Ballymurphy in August 1971 where 6 months before Bloody Sunday the Paras murdered her mother and 10 other people, including a local priest.

The same regiment returned to the area six months after Bloody Sunday and shot and killed 5 people in the Springhill area, three of them teenagers, including a young girl of 13, and another local priest.

This blog reminded everyone of the words of Tony Doherty whose father was one of those killed by the Paras who eloquently expressed the families feelings last June when Saville was published. Tony said:

Just as the civil rights movement of 40 years ago was part of something huge happening all over the world, so the repression that came upon us was the same as is suffered by ordinary people everywhere who dare to stand up against injustice. Sharpville. Grozny. Tiananmen Square. Darfur. Fallujah. Gaza. Let our truth stand as their truth too’.

As the names of those killed were read out the spontaneous response of the crowd was to begin to applaud and the applause continued unabated while all the names were spoken. 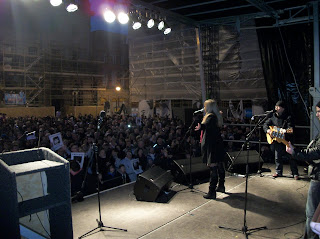 To conclude Sundays event Frances Black gave a rousing rendition of ‘Something inside so strong’. But it didn’t finish there.

This blog had also given her a note of a verse of We Shall Overcome and asked her to finish on this.

Once again the thousands joined in to fill the Guildhall Square with the defiant and risen voices of a free people.

It was a hugely evocative and emotional day of remembrance and joyous celebration.

All of us have our own memories of January 30th 1972, and the issues of concern around Bloody Sunday haven’t all been resolved. But for the families last Sunday one dark chapter in their lives was ending and a new more hopeful one is beginning. 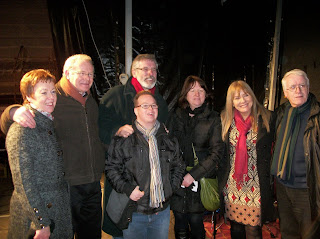 That one story that was something wonderful to read. I been lucky to have meet John Kelly and did take the mans hand, and hear the tells of that time, that day that hour. Maybe there is a reason for all things ,great and small and a pupose for achieving what has to be achieved. They were civil rights marchers, there fundamental human rights to life taken. Now honored dead the right of rights of the innocent.

The image of friends and families who fought on through decades of suffering in the name of truth walking behind the banner that said "VINDICATED" moves me so much. Thanks for writing this.

As there is no more Bloody Sunday marches, I feel it is important that the disaster is remembered by ALL parties who care about loss of human life.