Brian Cowen and Co – should go 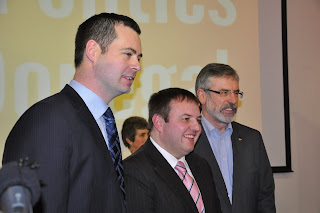 It was standing room only in the packed out conference room. The mood in the hall matching the public mood – it is time to send this bad government packing and to return two Sinn Féin TDs for Donegal!

The craic was mighty and it is clear that Padraig is hugely popular with the party activists. 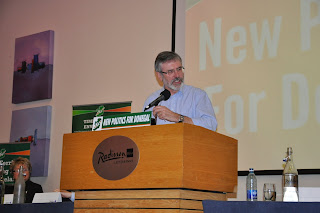 The same cannot be said for Brian Cowen within his own party or with the public. This blog is always mindful not to pay too much attention to opinion polls – but there is a consistency in the antipathy toward the government parties, and in particular Fianna Fáil for some time now.

The obvious divisions within Dublin government – now evident with Michael Martin’s challenge against Cowen - the failure of leadership by the Taoiseach and Cabinet, and the bad decisions and policies being pushed through in the Finance Bill, have stripped this government of any authority.

The longer it stays in power the more it damages the economy.

This government should go. But it won’t. It is determined to protect its friends in the banks and handcuff the next government to its bad policies.

And as Fianna Fáil seeks to defend its indefensible policy choices it lashes out. Last week the Minister for Finance – the architect of the austerity strategy that is punishing citizens – attacked this blog. He claimed that I know nothing about the economy. It was a harking back to the 2007 election when the FFers and others accused the Shinners of being ‘economic illiterates’.

The trouble for Lenihan and co. is that the Shinners were right and the detractors wrong – and the evidence of that is apparent in the current economic mess. It is the policies of the FFers and their desire to enrich and protect the golden circle of bankers and developers that has brought the state to its knees.

It is true that this blog is not an economist but neither is the Minister. If Brian Lenihan’s handling of the economy was a leaving cert he would be given a huge F for fail.

He and his party leader and colleagues have presided over the destruction of the economy, the imposition of huge cuts to public services and benefits, and the handing over of what remained of our economic sovereignty to the EU and IMF.

His criticism of this blog came in the same week that the state drew down the first €5 billion of loans from the EU and IMF. This loan and its punitive rate will be paid for by Irish taxpayers and citizens whose interests are not being served by Brian Lenihan and this government. This money is to pay for private bankers greed.
Moreover, it is the policies that the Minister and the Fianna Fáil leadership have implemented which have forced 450,000 out of work, are destroying the health service and pushing thousands of people back into emigration.

And it was Brian Lenihan and Fianna Fáil who brought the IMF to these shores.
December’s budget, which the Finance Minister is directly responsible for, last week stripped over a million people, or a quarter of the state’s population, of significant income as the government’s social welfare cuts took effect.

Almost 900,000 carers, people with disabilities, including those who receive a blind allowance, lone parents, widows, women who are pregnant and the unemployed will suffer cuts in their benefits. People earning minimum wage who were already living in poverty have taken further cuts, so that this government can fund a private banking debt.

In other words the poorest and most vulnerable are being hardest hit, while those who caused the mess are allowed get off scot-free.

This is economic insanity. Government policy is cutting the disposable income of those who spend the most in the real economy. Every cut Lenihan has inflicted will be felt in the local shops and services. It means less tax revenue coming in, more jobs being lost and ultimately, a deficit that continues to widen.

Ordinary working people are being punished to save Fianna Fáil’s friends in the banks.

Sinn Féin has laid out clear proposals to fix this crisis. Sinn Féin believes there is a better way, built upon burning the banking bondholders, introducing a stimulus package that will create jobs, building the all-Ireland economy, overhauling the taxation system and eliminating wasteful spending to ensure an economic system grounded in principles of equality.

This state can no longer afford this government. The political choices made by Brian Lenihan and Fianna Fáil have been a disaster. 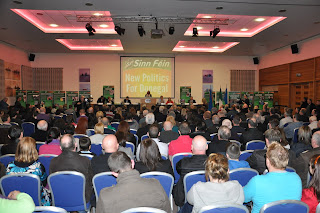 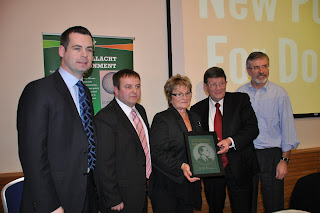 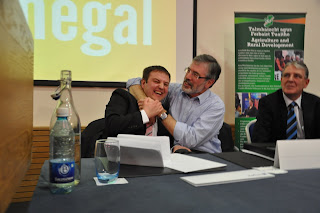 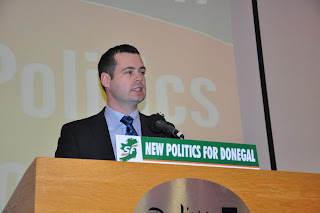 Yes Gerry your right,
The Government confirmed that it has launched an investigation into the payments after bank officials admitted supplying incorrect and misleading information on staff bonuses to the Dail. There is always a problem about investigations into yourself. Banks bailed out by the taxpayer have paid bonuses totalling €45m since being guaranteed by the State, including €20m to staff at the failed Anglo Irish Bank. It has now emerged that bonuses were paid. It also had to disclose payments of bonuses connected to work done between 2006 and 2008 to the minister. Lenders had borrowed €51bn (£43bn) from the Irish central bank by the end of December, under an obscure progamme listed in the balance sheet as "other assets",on top of €132bn in loans from the ECB. This will end up as the national debt of Ireland.

Sinn Fein to get 2 td's to represent donegal

Padraig pearse- the omen's look good- history the present and the
future are all on Sinn Fein's side
it is time to win for all.