A New Type of Politics 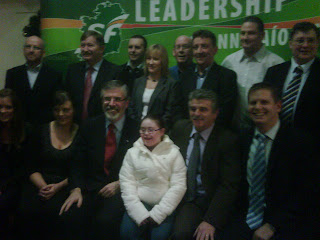 This blog is now the Sinn Féin candidate for Louth and East Meath. In the Fairways Hotel last night party activists from across the constituency unanimously and enthusiastically endorsed my candidacy. I thank them for that.

Louth like all the border counties has suffered grievously as a result of partition. The Good Friday Agreement has provided a peaceful and democratic way to unite the Irish people. Sinn Féin is committed to this.

The general election, when it comes, will be the most important in recent decades. There is huge public dissatisfaction and anger at the revelations of corruption within the political system. There is frustration and resentment at the policies of parties whose goal is to bail out the banks, and their developer friends in the golden circle, while handing over sovereignty to the IMF/EU.

This blog believes there is no more important time; no more relevant time than this for republican politics and core republican values.

Take down the Proclamation. Read it. Carefully. It is about freedom and empowerment of citizens, and equality and inclusivity and sovereignty.

So, how do we translate all of this into a new type of politics? How do we make genuine republicanism relevant for citizens?

Pearse Doherty spelt it out eloquently and passionately in his budget speech.
It is about defending public services, constructing a new and fairer tax system. About protecting the disabled and disadvantaged, as well as low and middle income earners. It has to be about stimulating the economy and protecting and creating jobs; promoting the interests of our rural communities, including the promotion of the farming community and fishing industry.

There is also a need for a root and branch reform of this discredited political system.

Change is possible. Look at the peace process, imperfect though it is. Much more needs to be done by the Dáil to transcend partition and to have a single island policy focus. Good inclusive relationships need to be continuously fostered with unionists.

The gap between the political classes and the people needs to be removed. Politicians should be public servants. People are citizens.

Citizens have the right to be involved in all matters of public policy. And politicians and other public servants must be accountable to their peers. All of this is an argument for republican systems of government; that is, systems in which the people are sovereign and equal.

Such a society has to be tolerant. Society must reflect and include the entirety of its people, not part of them. Why should gender or sexual orientation be the basis for the exclusion of anyone? Or disability?

Why should race or class or skin colour or creed give one group of human beings the ability to deny other human beings their full rights or entitlements as citizens?
And if citizens have rights, why are they not all-encompassing rights? Should the right to the basics for life not include economic rights as well as political and social This blog believes that all human beings have the right, as a birthright, to be treated equally.

A rights-based society – a true republic - requires citizens to fulfil their obligations for the common good. It also requires the state to inform all citizens of their rights, and to uphold and defend these rights.

The political system in the 26 counties needs completely overhauled and democratised, and all with an eye to advancing the all-Ireland institutions and structures that will benefit society on this island.

Historically, Ireland is a highly centralised society in its political administration, going back to the days when Britain ran the whole island from Dublin. Dublin has become more dominant still as a result of urbanisation and the shift from rural Ireland to the capital.

This blog believes that the Oireachtas needs radical, root and branch reform, including a reform of the electoral system. Ministers should be more accountable and be paid significantly less; there should be greater decentralisation, including the devolving of real powers to local communities in respect of schools, social care for the elderly and dependent, and improving the physical environment.

Referendums could have a key place in politics, allowing the people themselves to legislate directly.

These are just some thoughts, some ideas of the new type of politics – republican politics – that might shape the future.

And part of this means reaching out to others of a like mind; other progressive members of society who are prepared to build an alliance for a new Ireland and a new type of politics that is free of corruption and characterised by civic virtue and social justice.

In all of this we should be guided by Wolfe Tone’s motto, which remains perennially relevant, to seek to unite politically all patriotic people “under the common name of Irishman”, which of course includes Irishwomen as well.

There will be three elections in 2011. On May 5th – the 30th anniversary of Bobby Sands death – the electorate in the north will vote in local government and Assembly elections. When the Taoiseach eventually calls an election we will vote for a new Dáil. It looks like being an interesting year.
Posted by Gerry Adams at 4:24 PM

I was fortunate to be present at the Fairways last night when Gerry was selected to run for Louth & East Meath. I am looking forward to being able to say that he is the TD for the area. His speech has given us hope for the future and has inspired us to take part in this new revolution. We are privileged that he accepted the nomination and look forward to getting him elected in the near future. Go raibh maith agat Gerry

We welcome Gerrys nomination and the speech he gave was inspiring and gave us hope. We look forward to working with our new TD in the near future. We are privileged that he accepted. Go raibh maith agat Gerry

I'm a Swiss citizen and I have a blog in french about Northern Ireland.
I have lived a few months in Northern Ireland last year. Then I had to return in Switzerland.
I had a quite short political experience in Switzerland as well as president of local authority.
It should be too long to explain you my reasons here but I'm a supporter of you, of Sinn Féin and of the republican cause.
My projects in a very near future will be to become a member of Sinn Féin and support the "Ag Aontú Éireann" website and Sinn Féin with my blog.
I would like to congratulate you for your blog and especially for your message of today 14 December.
I was very touched by your words today for a united Ireland and I hope it will be a reality one day. It must be so!
May your next elections be a large success for you and for Sinn Féin as part of the conquest of the Dáil Éireann!
I hope to come back very soon next year in Northern Ireland.

Gerry ,The enthusiastic Sinn Féin candidate for Louth and East Meath.
Your on the right path. The Irish people and nation bulding, a new designed nation for the people of Ireland. People are sovereign and equal, the path is set and course of action is clear. The steps are not always straight and narrow and there may be some collision that my be in the course,but the pasage is now established. It is straight talk as walk , in the end it is going from here to there, from truth and justic ,from than to now. Good works Gerry

What you have written make total sense. For the 26 counties is a Republic in name only, I far as I can see.