Monday was this blogs last day as a member of the Northern Assembly. The baton was passed to Pat Sheehan who woke on Tuesday morning as the new MLA for west Belfast. Adh mór Pat.

My last day as an MLA was a busy day.

At the end of my last speech in the Assembly this blog said my goodbyes. A thank you to the Ceann Comhairle and his colleagues for the fair, balanced and inclusive way the business of the Assembly is conducted, and a go raibh maith agaibh to all of the staff, from the cleaners to the admin people.

The Assembly is approaching the end of its first full term. That is a remarkable achievement given the difficulties that have had to be overcome. But the Assembly has to be about delivering for citizens. I reminded them of this.

“The island of Ireland is too small for us to be separated forever by an artificial border. Most sensible people know this and the Good Friday Agreement recognises this. God speed the day when we will be united. Today’s debate is an example of the issues that must be tackled if we are to improve the living conditions of citizens and particularly our children.”

And that was it. Apart that is for the remark of a DUP MLA who said he was glad to see the back of me. Ah well, there are some unionists who remain stuck in the past. They still refuse to speak to republicans and yearn for the old days when they ran the north as a one party state and wouldn’t have a Catholic about the place. 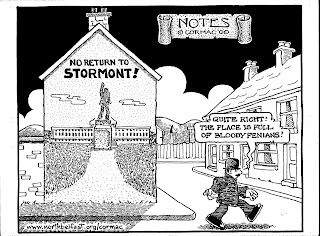 But those times are gone. The Good Friday Agreement and years of patient and focussed negotiations have changed all of that and we now have political institutions, rooted in power sharing and equality and with a strong all-island dimension. Sinn Féin is in government and the bigots and begruders just have to get used to it. That’s the future.

The afternoon was taken up with a meeting with the North and West Belfast Parades Cultural Forum. This blog first met them in August when we got together to discuss the issue of contentious parades and protests. That was an important engagement. Our conversation on Monday afternoon was a candid and honest discussion. We agreed a schedule of meetings to be held between now and Easter next year.

There are difficult issues involved but this blog believes that with dialogue and a genuine commitment a resolution can be found. 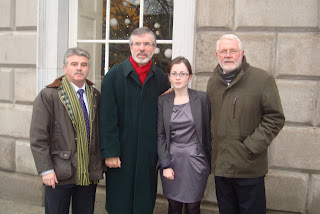 On Tuesday morning we were all up bright and early and heading for the capital. From one assembly to another. For budget day. The temperature gauge in the car was telling us that it was minus 10. Cold.

Sinn Féin will vote against the budget. If it gets through we will seek a mandate in the upcoming election to renegotiate the EU/IMF bailout and scrap what is being presented today. There is a better way of tackling the economic crisis.

Most TDS here know that. No one who I bumped into around Leinster House today, and I spoke to quite a few of Fine Gael and Labour TDs and one or two FFers, are happy with the way things are and their role in it at this time. The economic crisis has become a social crisis and increasingly a political one. All of the makings of a perfect storm.

James Connolly had a word for those responsible,

‘Ireland, as distinct from her people, is nothing to me; and the man who is bubbling over with love and enthusiasm for ‘Ireland’, and can yet pass unmoved through our streets and witness all the wrong and the suffering, the shame and degradation wrought upon the people of Ireland – yea wrought by Irish men upon Irish men and women, without burning to end it, is, in my opinion , a fraud and a liar in his heart, no matter how he loves that combination of chemical elements that he is pleased to call Ireland.’

By the way if you want to keep up to date with or to be part of Sinn Féin’s Uniting Ireland campaign check out www.unitingireland.ie 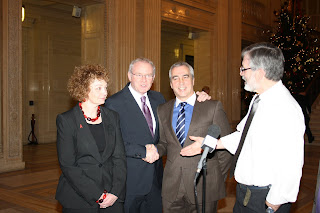 Caral, Martin, Pat and myself in Parliament Buildings
Posted by Gerry Adams at 4:00 PM

What you said about children being valued and encouraged to develop an emotional vocabulary is very heartening.

If all of the children are cherished equally, I'm sure the worst excesses of self-inflicted human sufferings can be eliminated.

But you're still up against a mountain of moral depravity from which streams of systemic corrosion flow and upon which the accumalation of all that is evil and destructive to humanity depends.

The night is still very dark and the earth is moving off of it's access.

God speed Gerry,
You have moved on and with much to have pride in over what has been done in the name of Irish good.
The job ahead is clear as the roads of Ireland. The meandering roads as the governing bodies both drivers and pedestrians, and one must have a satisfactory knowledge of these rules. The learning about safety doesn't stop once you pass a test. It takes a lifetime. It is this lifetime of experience that you bring with you Gerry. You will make the change, the change form artificial borders to a nation of true social equality.

I hadn't read those words from Connolly before....very apt for these times.

Gerry,
Even though I live in the states, I wish all the best to Martin & yes, it is with a pang of sadness to see the baton passed. I wish you well in all your future endeavors!
I sent you a message on FB, don't know if it got through, about the charity Pretty n' Pink, NI's only Breast Cancer support organization.
If your not already aware of them, you can contact me through facebook (Mary Anne Ozmon-Grove)
All the best,
Maire