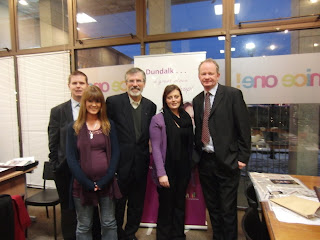 Last Thursday Councillors Tomás Sharkey, Jennifer Green and Edel Corrigan introduced this blog to Andrew Mawhinney who is the Dundalk Town Centre Manager. Andrew explained to us his plans for 2011 but he also showed us some of the material they are using in an exhibition this weekend to mark US President Bill Clinton’s visit to Dundalk in December 2000.

Just before he left office President Clinton made one last brief visit to Ireland. It was his third as President. And like the previous two it was a triumphant occasion as citizens gave him, his wife Hillary, and daughter Chelsea an exuberant cead míle failte.

The Clinton clann landed in Dublin early on December 12th and after a busy day of engagements they arrived in Dundalk around 9pm where a huge crowd was waiting patiently for them. Martin McGuinness and this blog were there also.

Pierce O Hanrahan who was then the Chair of Dundalk Town Council, presented President Clinton with a bronze sculpture that had been made by a local artist Sandra Bell. People still recall with affection his calling Hillary Clinton, ‘President Hillary’. Brian Kennedy sang Danny Boy and there was an impressive fireworks display.

It was a cold but good night in Dundalk. It was another time of crisis in the peace process but all of that was set to one side as people gave a deafening thank you to Bill Clinton for his support. It was a timely reminder of how far we had all come.

This weekend the Dundalk Town Centre Management along with Dundalk Council have put together a weekend of events to mark that occasion.

To mark the occasion this blog dispatched an email to President Clinton outlining Dundalk’s ‘Clinton Celebration’ weekend and asking if he would send a letter of support for the Dundalk event. On Saturday an email arrived from his office. It contained a letter of appreciation from the President for Andrew and all of those involved in the celebratory events.

In his letter Bill Clinton sends his best wishes, speaks of his fond memories of that visit and says he looks forward to returning.

It was a speedy and generous response and reflects the great affection the Clintons have for Ireland.

Thursday also saw this blog meet with the local County Registrar Mairead Ahern and several of her colleagues in the Electoral Revision Court in Dundalk Council. I had been told there was a problem over my registering in the constituency to vote. Mairead, who is the sister in law of outgoing TD and Justice Minister Dermot Ahern, explained that there is fixed date in law – September 1st - for residency qualification.

This was six weeks before my decision to stand in Louth.

Some of the media, including - no great surprise - The Irish News and The Irish Independent, got carried away with the story. But it was as someone said a storm in a teacup. There is a supplementary register and one of the panel said they would send out a form so that this blog can vote when the time comes.

A bigger storm is brewing in Dublin where the government was forced by Sinn Féin to do a u-turn on its refusal to allow a vote in the Dáil on the EU/IMF digout for the banks.

For weeks we were told that this dig out was a done deal – can’t be changed – written in stone, and so on.

Sinn Féin’s view is that the government’s refusal to put the EU/IMF deal to a vote in the Dáil is a breach of the constitution. So, Caoimhghín Ó Caoláin initiated legal action.

Within 24 hours the government had flipped on its position and announced that a vote will now be held next Wednesday. The IMF has put its contribution to the deal on hold until the vote is held.

So, all the claims that the deal is fixed and cannot be changed is exposed as nonsense. There are other options available. A proper recovery programme needs to be put in place that stimulates the economy rather than contracting it.

There is an onus now on all TDs who value Irish sovereignty to vote against the EU/IMF deal next week. It can still be opposed.

Those who support the EU/IMF running the state’s economy – or who do not vote against it should be mindful that they will have to explain that to the electorate when the Taoiseach eventually is forced to go for an election. 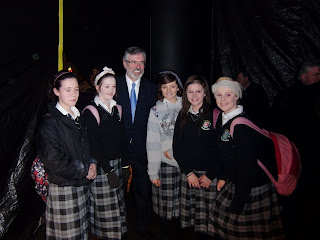 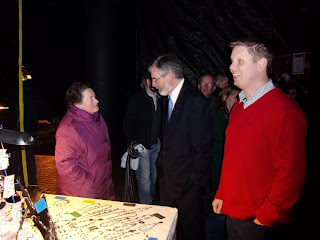 Text of Letter from President Clinton

Dear Gerry:
Please pass along my deep appreciation to Andrew
Mawhinney, the Town Management Committee and
Council, and all of the folks in Dundalk celebrating
this weekend.

When Hillary, Chelsea, and I arrived in this town
ten years ago, we were introduced to the incredible
warmth and generosity of the Dundalk community.
I've cherished my recollections of that trip, and
I'm delighted to hear that our visit was memorable
for so many of the wonderful people we met.

As I said that evening in December 2000, a piece of
my heart will always lie in Ireland. I'm glad that
I was able to visit this proud town during my final
trip abroad as President, and I look forward to
seeing it again soon.

I was surprised at the news reports of your new role, seem like they are blinded to the political factors. I should not be surprised in the media, in relating their often lost views about the social relationships involving authority or power. It is the characteristc of politics and that profession that creates change at times. I understand that Chelsea has a strong interest in the Peace Process and has written on the subject, I would be sure Hillary had been of some help on the subject. "A proper recovery programme needs to be put in place that stimulates the economy rather than contracting it. " you seem to have hit the head of the problem once again Gerry. They will have to wake up and smell the coffee,Sinn Féin's brand.

In 2004 when President Clinton had his bypass operation, Mrs. Clinton was on ABC's Good Morning America being interviewed about his health etc. The interveiwer asked her what was the first thing he said when he woke up after the operation. She said he held her hand and said "Wasn't Ireland wonderful". I cracked up, he really fell in love with the place, which is no surprise when you think about it. That made me love Clinton all the more.

Bill Clinton is one of the greatest humanitarians of our time.
As is Jimmy Carter. Despite the shameful acts of the political party in this country (I need not mention them) that had plunged us into almost economic ruin, and their continued efforts to do so, one only needs to look and compare the actions of the above gentlemen & others here and in NI to see who truly has the best interests of their citizens at heart.
Maire

Yeah, keep after them Gerry. Don't let them get away with anything.

You did a brilliant job in the Stormont assembly and you'll do an even better job in the Dail in Dublin.

I always liked Bill Clinton and his lovely wife Hillary and beautiful daughter Chelsy. It's good to hear that they're well thought of in Dundalk. I love county Louth. It's such a beautiful rugged place and Neigbours South Armagh. You're a lucky man to have got a place there. And the locals are very fortunate to have a tireless worker and genuine socialist to vote for in the general election early next year.

God Bless you Gerry. Hang in there bud. Irelands fortunes are changing for the better. Out with greed and corruption, in with fairness and humanity. The night is darkest just before the dawn.