Writing women back into Irish history 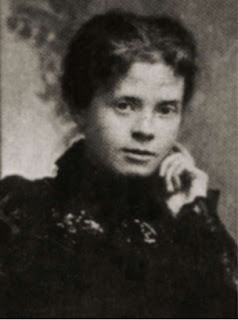 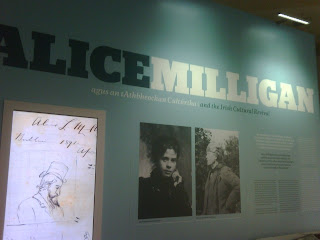 While on hunger strike in 1981 Bobby Sands asked if we could get him some of the poems of Alice Milligan. Bobby was in the prison hospital. It was very difficult to fulfil Bobby’s request but due to the diligence of our friend Tom Hartley, that great magpie of our struggle, a small hardback book of her poems was liberated and sent into the H Blocks. Bobby was delighted. I’m sure Alice Milligan would have been delighted also.

Many moons later Dr. Catherine Morris, who is now the Cultural Co-ordinator for National Library Ireland and Trinity College Dublin, wrote an article on Alice Milligan. She was researching a book. This blog wrote to her and told her this story.

On Wednesday I was invited by Catherine to go to the National Library for a preview of an exhibition on Alice Milligan. It’s entitled ‘Alice Milligan and the Irish Cultural Revival’.

Her exhibition is an impressive, informative and hugely fascinating account of a remarkable woman whose significant contribution to Irish culture, the arts and politics in the late 19th and early 20th century is largely unrecognised.

Dr. Morris has done a great service to Ireland and to Irish women. She has rewritten Alice Milligan back into our history. Dr. Morris is also to publish her book on this wonderful visionary activist and patriot. 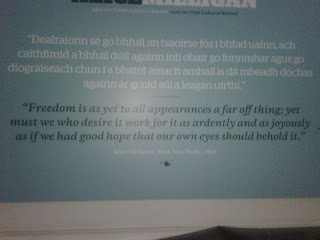 Who was Alice Milligan? She was born in Gortmore outside Omagh in west Tyrone on the 4th September 1866. She was the third of 13 children. A few later the family moved to Belfast. It was a unionist household and Alice was educated at Methodist College and at Kings College in London. She trained to be a teacher and for a time taught Latin in Belfast and Derry. She herself said that suring this time she ‘learned nothing of Ireland.’

In her 20’s Alice, along with her father, were part of the Belfast Naturalist Field Club and the Ulster Archaeological Society. It was here that she became a keen photographer and learned how to transfer images on to glass slides for use in public presentations and theatre productions – an early power point presentation.

Her conversion from unionist to radical nationalist occurred when she was 24 and living in Dublin. She records in her diary in May 1891 – which she kept for three years from 1891 to 1893 – ‘While in the tram going up O’ Connell Street I turned into a Parnellite’.

His death later that year reinforced her conviction and she threw herself into the emerging Irish language and Cultural revival that was then taking place.

She was very mindful of the inequalities in Irish society, particularly for women. In the great debate around the constitutional future of Ireland women were excluded and ‘were not called upon to have any opinion whatsoever.’

Alice returned to her family in Belfast. She was determined to pursue her new opinions, including learning Irish. Undaunted by the anti-Home Rule sentiment around her Alice and her friends declared their determination to ‘lighten the darkness which prevails to such an extent in this province about Irish literature, history and music.’

She was described as the ‘red headed nationalist’ and a ‘black mark’ on her family’s name.

Alice Milligan was a prime mover in the centenary celebrations in Belfast to mark the 100th anniversary of the 1798 Rising. She was part of the ‘Ardrigh group’ which was a loose affiliation of republicans and nationalists who came together at Francis Joseph Bigger’s home, ‘Ardrigh’, on the Antrim Road to discuss politics and agree ways to promote the Irish language and culture. Milligan was at the centre of all of this, including writing ‘A Life of Wolfe Tone’.

She was also involved in the establishment of a wide range of other groups, among them the Henry Joy McCracken Literary Society, the Women’s Centenary Union and branches of the Irish Women’s Association. She was a prolific writer in local journals and newspapers. 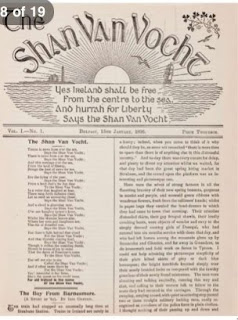 In 1895 Milligan and Anna Johnson founded the Northern Patriot and then the Shan Van Vocht – taken from the Irish An tSean Bhean Bhocht; the poor old woman – a representation of Ireland.

Both were hugely influential publications. The two women wrote much of the content, including poems, songs, and political essays and encouraged new writers and thinkers. James Connolly received his first commission to write in an Irish publication from the An Shan Van Vocht.

Milligan and her friends understood the threat that existed to the Irish language and culture. British policy was to destroy both in order to destroy the Irish identity and sense of national pride. They encouraged festivals and language classes and promoted drama and the Gaelic League.

Her pioneering work in the theatre helped forge the connection between drama, the theatre and the Irish language. She wrote drama and produced plays and toured widely throughout the country with these dramas. 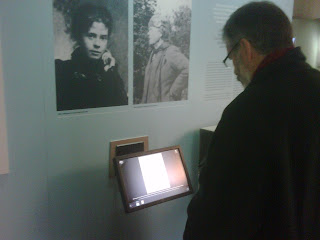 Thomas MacDonagh, who was one of the signatories of the Proclamation and was executed in 1916, recognised the immense contribution of Alice Milligan. In the Irish review of September 1914 he wrote: ‘I will begin with the best. ..It is meet (appropriate) that this Irish National poet should be a woman. It is meet that she, like so many of the Irish Volunteers, should be of North East Ulster. Alice Milligan, Ulster Protestant, Gaelic Leaguer, Fenian, friend of all Ireland, lover of Gaelic Catholics as of her own kith …Alice Milligan is the most Irish of living poets and therefore the best.’

She was a friend of most of the leaders of republican and nationalist politics and the Irish language movement. She campaigned tirelessly on behalf of Roger Casement and attended his trial every day. After his execution she spent time visiting Irish political prisoners being held in English jails.

She also increasingly took on the role of carer for members of her family. She moved back to the north and settled outside of Omagh. She continued to write and campaign and in the late 1920s helped establish the Anti-Partition Union. She died in 1953.

Alice Milligan was a passionate, gifted and articulate advocate for Ireland. She loved Ireland and the Irish people and her contribution to all aspects of Irish society was immense.

It is fitting that each Easter members of the Milligan-Harte Sinn Féin Cumann in west Tyrone lay a wreath at her graveside in memory of a great Irish woman.
Posted by Gerry Adams at 10:20 AM

It is a great Irish story Gerry,chiefly in view of recent
developments. Our Irish qualities, and how gradually its roots have
grown from various elements of Celtic Ireland. This understanding of the rich Irish literary movement,is very important.
The Irish Renaissance, moving
forces and what the forces moved, great is the hope that is bound up with it. As Alice Milligan,we ponder upon Irish problems,and look to the heart of Irish needs. This our national and social ideals before us, as well essentially intellectual ones. The destinies of things Irish are more closely identified, by many as political past,finding its strength behind the social changes and the political scene-shifting. The account that the country is lapsing to decay or chaos are superficial observers.The scattered
sections of the Irish people are more intently to the realisation of their Celtic selves. The Irish people are by nature a literary and educating people. Our Culture and intellectual Celtic enthusiasm is part of our national character. The
spirit is there, dim too often, but in Irish fields and Irish firesides, there is legends that Irishmen and Irishwomen have a real purpose.

Gerry - thanks for the article. Hope you won't mond if I post a link to it from my blog as I am sure this will be of interest to my readers.

I love to think that Bobby Sands had the pleasure and companionship of a good book of poems as he spent his last days. It's the same spirit that moves in both patriotism and in poetry. We in the Republic need both now more than ever. I think we may have forgotten for a few years there...
Nice blog Gerry.
Mary Stenson Shanahan