THE RISING OF THE MOON. 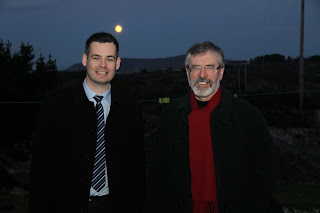 This blog comes to you from Donegal South West. I came here by way of Kerry which is a long way to travel even by Sinn Féin standards, but Steve MacDonogh my friend and publisher’s funeral was in Dingle. So I went there on Saturday.

On the long way up the West afterwards someone told me that Sunday was the anniversary of the original Bloody Sunday when the Black and Tans gunned down 14 civilians in Croke Park.

Then I read that last Wednesday had been the late Luke Kelly’s birthday. He would have been seventy. Luke was a wonderful balladeer. His version of Dirty Old Town, Scorn Not His Simplicity, ASong For Ireland, and Raglan Road are unsurpassed. He also wrote Why Died The Sons of Roísín , a prophetic poem given the events this week in Ireland. This is my version of it gender proofed but otherwise unchanged.

Never was there a more appropriate verse. And never was it echoed more angrily than at this time decades after it was written

Ireland is at a crossroads. The southern state is led by a government that has misled, and confused and lied to the Irish people for at least three years. There is a deep economic and social crisis. This Government is probably the most unpopular in the history of the state. It is now implementing bad, deeply damaging policies.

The government got it wrong on the bank guarantee scheme.

It got it wrong in implementing successive austerity budgets that drove down productivity while driving up unemployment and poverty.

And it got it spectacularly wrong with a banking strategy that has bankrupted the state.

The Irish government has no mandate whatsoever to do this. It has handed authority for the state over to outsiders in order to give a dig out to the Banks which the Irish people will pay for years to come.That means that every man,woman and child in the state will be saddled with €40,000 of debt.

When Brian Cowan and Brian Lenihan made their announcement on Sunday to ask for a bailout from the International Monetary Fund and the EU and European Central Bank I was canvassing in Donegal South West with Pearse Doherty. This is a by-election that the Fianna Fáil/Green Party coalition did not want.

The Irish government’s objective was to deny citizens the opportunity of an election in which they could pass judgement on the four years of bad government financial policies.

Last week it repeatedly said that there would be no bailout. Their candidate in Donegal South West was filmed telling one constituent that there was no possibility of the IMF coming in. He was doing this at the same time as the government was talking to that body and inviting them to take over the running of the state.

On Monday night the Taoiseach said he would bring in a budget and call an election early next year. He should cancel the budget and call the election now. The government should resign and give citizens a say in a general election.

The people of Ireland face enormous challenges at this time. But we are no mean people and I am confident that with clear headed leadership and sound economic policies we can rebuild the economy and return prosperity. 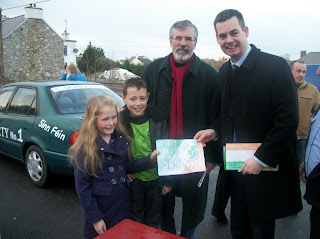 The Donegal south west by-election will give a clear sign of where the people are. For me it is very reminiscent of Bobby Sands entry in his diary on the 17th day of day of his hunger strike.

Hello Gerry, your doing a wonderful job,on stepping up its campaign of opposition to cutbacks in health, education and other vital public services. As Luke Kelly put down in words so well-we have sold enough of Ireland to be but strangers For what suffer our patriots-. And sale no more of yourself, your family, your community and your country.
That man is little to be envied whose patriotism would not gain force on the ruins of his nation.
Evangelized hundreds of Irish years and Irish tears.
What a what perverse fate do
we find now, a thousand
years pass, coming to Ireland to stamp out her fires set beneath the mountain ferns. I can not forget the heritage of learning and the tradition that once held the intellectual state of all Europe.
Our literature teems with eulogies of what we have lost, but they do not, however, themselves fail in mutual recognition of the higher altitudes they occupy. The Irish race seems o preferred their conscience and their religion to peace and prosperity, at times. It is time that we have the conscience of peace and prosperity, this is long over due.

And when the moon shows its-self
after the vote it should see the
rising of SINN FEIN.