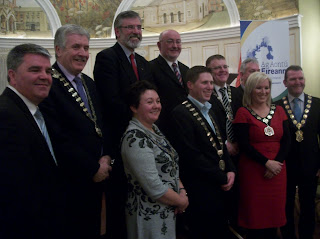 The news was about the weather. Blizzards and icy winds. Up to 20 inches of snow expected. Roads covered in black ice and the mercury dipping ever further.

But still they came. The main hall in the Westenra Hotel in Monaghan Town was packed. Standing room only. As Jackie Crowe the Mayor of Monaghan said ‘this issue of uniting Ireland is too important for us to allow a little bit of snow and cold to deter us.’

‘Bridging the Border-Reconnecting Communities’ is aimed at highlighting the problems pressing down on border communities. Many of these communities are separated and isolated from their natural hinterlands as a result of partition. This leads to economic and social hardships along that corridor.

The Bridging The Border project will collate views from a wide spectrum of public and community opinion. These engagements with business and voluntary and community bodies, with rural communities and statutory agencies, will be led by our Mayors/Chairs within each council area.

They are all well placed to compile a major report which will bring forward concrete proposals to tackle the bad effects of partition. This is an excellent project. It is positive republican activism at work.

This blog commends all those involved in this initative, including Uniting Ireland Co-Ordinator Lucilita Bhreatnach. The Monaghan conference was originally scheduled to be held in Donegal but following Pearse’s success in the High Court and then the setting of a date for the Donegal South West by-election, the organizers very quickly moved the conference to Monaghan. 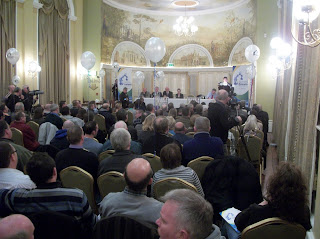 Their success was evident in the packed hall.

There was of course a major focus by all the speakers on the current economic mess, setting it in the context of partition and the two conservative states that were created after the passing of the Government of Ireland Act 90 years ago this year.
Independent economist Michael Burke made a very useful and interesting contribution. He tackled the often used argument that the north cannot survive without the British subvention and that the south cannot afford reunification.

Michael explained that the British are very guarded in producing detailed figures on how it manages its ‘regional’ economy. Notwithstanding this Michael revealed that the gap between the money raised in the north and the subvention is significantly less than the £14 billion often quoted. It’s around £3 billion he said. Crucially he added the north also creates significant levels of wealth each year. Around £29 billion. But almost half of this flows out of Ireland to Britain and elsewhere. A new political and economic dispensation could ensure that more of this is available for the local economy.

Michael also pointed out that an end to partition would see the north become part of an economy which would have the fiscal powers currently denied it. Instead of being at the backend of a British economy which is skewed against it, this and an ability to trade with the rest of the world, would see the north’s economy quickly grow.
There were also very good contributions made by other speakers, including Caoimhghín ó Caoláin TD and Cavan’s Katherine Reilly.

The agreement at the weekend between the Irish government and the EU and IMF on the bailout drew much criticism.

For four years the Irish Government’s desire to look after the interests of a small wealthy elite has seen it pursue an austerity strategy that has stripped over €14 billion of the economy.

The economy has deflated, unemployment has reached new heights, emigration is on the increase and families are losing their homes. Now the government has taken out a huge loan from the IMF and EU, has stripped the National Pension Reserve Fund to pay the bankers and plans to take €15 billion out of the economy over the next four years.

It is handing more and more power over our economic future to the IMF, the EU and the European Central Bank.

The Government’s economic and banking strategy is not credible.

This blogs made it clear that Sinn Féin will not be bound by the Fianna Fáil/Green Party economic plan and that we will seek a mandate in the next election to renegotiate what has been agreed.

It was a very good night.

And then this morning your man is trekking us through the snow to Dublin to meet with Pearse Doherty as he arrives in from Donegal South west for his first day as a TD.

As we travel news is breaking that Dermot Ahern has announced his decision not to stand again in Louth. He was widely criticized after his recent gaff when he claimed that the involvement of the IMF was ‘a fiction.’ Ahern was seen to be part of a government strategy to confuse and mislead the public.

Whoever stands for Fianna Fáil the fact remains that it and the Green Party are primarily responsible for the current economic mess. Its policies are driving the state and ordinary families into further and further debt.

The government should go. Citizens should decide on how we are to be governed. There would not have been a bi-election in Donegal if Pearse and Sinn Féin had not gone to the High Court. Our aim now is to bring about a general election as soon as possible. 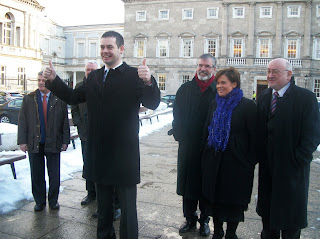 Speaking of blizzards, snow and the economy, I'm sure you know the story of Iceland. They were prosperous when they were socialist; then the big banks came along and--to make a long, sad story short--siphoned all the profits off the top and sank the economy. If you get any grief for being a socialist when you're running for Louth, just remember Iceland. They were doing really well 'til the "free market" came along. It's time for governments to take charge again, and invest in the people instead of instead of corporate fat cats.

Yes, people will show up in the cold for a positive meeting, was just in contact with friend in Omagh, is very bad weather. Wonderful job, we must fight Ireland's Debt of Servitude. We can not justify the Irish paying the entire price for upholding the European banking system,and cannot accept these terms. The Border project so symbolised this new sovereignty and community bodies needed for continued republican activism.

This is very important work because the border area has been devastated by partition, as has the whole of Ireland, in my opinion.

And I have to commend Sinn Fein as the only party that has worked tirelessly to right this long standing injustice.

Congratulations to Pearse Doherty and all of his team for a great result in Donegal SW. And I see also that Dermot Ahern is set to take the money and run instead of facing your good self at the ballot in Louth. What a risible character he is. A real specimen of his type in a party that has become a byword for incompetence.