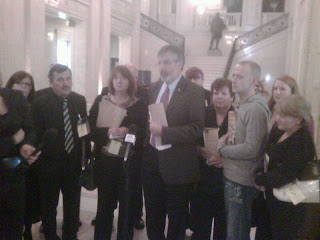 This blog has known many British Secretary’s of State. They have come in all shapes and sizes and with differing levels of knowledge and understanding about the situation here.

Some have done their best by their own lights. Others have been inept. Still others indulged in sleight of hand politics. On one occasion this succeeded in collapsing the peace process. And at other times the political institutions fell.

What they all have had in common was and is a determination to put British interests first.

Last Thursday this blog facilitated a meeting with the present incumbent, Owen Paterson, and the Ballymurphy Massacre families.

Regular readers of this blog will know that in the two days after the introduction of internment in August 1971, 11 people, including a mother of 8 children and a local Catholic priest, were killed by the British Parachute Regiment.

None of those killed had any connection to any armed group. They were all innocent civilians.

The families have always disputed British Army and RUC claims about the circumstances surrounding the deaths. They want an independent international investigation into the deaths of their loved ones and an apology from the British government which recognises their innocence.

This was not the Ballymurphy family’s first meeting with a British Secretary of State. In August 2009 I brought the families to Hillsborough Castle to meet Shaun Woodward. It was an emotional occasion as all the families spoke of the deaths of their loved ones.

For them the events of 1971 are as yesterday. The memories are raw. There were tears. The trauma of those events is fresh and horrifying. The family’s case for an independent international inquiry is compelling.

Shaun Woodward was shaken by the accounts. That was obvious from his reaction. All who listened that evening, as one after another the family representatives exposed their deep hurt and recounted the violent deaths of their loved ones, were visibly moved.

But after that British Secretary of State went back into his system to discuss this case his political response to the families was zilch. Zero. He did nothing.

So, the families and this blog did not have high hopes for our meeting on Thursday with Owen Paterson. His track record thus far has not been good. Even before he became Secretary of State Paterson was part of the short lived and failed effort to re unite the UUP and the British Conservative Party.

He was also at a meeting which brought together the DUP, the UUP and the Orange Order to agree a unionist candidate to stand against Michelle Gildernew in Fermanagh South Tyrone in the last Westminster election. That also failed. 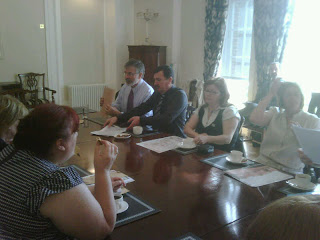 On Thursday we gathered in a stuffy room in Stormont House, where Britain’s Northern Ireland Office is based in a greatly reduced form. For an hour the relatives told their stories. Neither time nor the retelling of these accounts diminished the emotion or the power of their words.

For his part Paterson’s contribution lacked any affinity with the experience or grief of the families. He may have felt for them at a personal level but his stock response was to try and shift any decision on the Ballymurphy case into the wider discussion about how society tackles the fraught issue of the legacy of the past.

A suggestion by him that they use the Historical Enquiries Team was met with derision by all of the families but particularly those who had already engaged with the HET and come away from that experience deeply angry and dissatisfied.

Rather than acknowledge his poor judgement and the inappropriateness of wearing this wrist band to this particular meeting Paterson chose to defend his action.

One relative put it to him that he had the opportunity, by taking the right decision on the Ballymurphy Massacre, to define his time as British Secretary of State positively. And this blog added that the right decision by him could liberate these families and many others and make a valuable and constructive contribution to tackling legacy issues.

Paterson did agree to come back to the families after the New Year in response to their demand for an independent international investigation. I am not hopeful for his response.

But when the meeting was over the annoyance of the relatives was obvious. It had been a tense, emotional and at times bad engagement.

The families made it clear to Owen Paterson that they were not for giving up. They are determined to achieve their demands and secure truth for their loved ones. This blog fully supports their efforts. So should everyone who believes in justice. 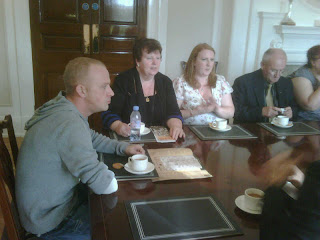 Thanks again Gerry, very good insight into the real world of stuffy rooms in Stormont House.
Anyone reading the true accounts of what happened at Ballymurphy,could not be moved,I like to think. The Ballymurphy legacy,now part of the heritage of more than insensitive
British interests. The crimes of the British will be challenged, on all levels ,in all places. The legacy of the past, is and has always been about people. The human condition,encompasses the experiences of being human in a social, cultural, and personal context.the human condition', but what is it? The Irish Human Condition is one of nature and course of human social evolution. This means a nation's mentality,this assertion in its broadest sense. Owen Paterson predispositions of one kind or another or just simple ignorance is part of the problem. People get on with the routine of life,when your alive to do it.

I hope the relatives get a good response from the secretary of state. Don't see why it should take three months though.

All this work that people do in search of truth and justice yet an MP speaking in the common's can put any topic on the mainstream agenda in five minutes.

Why? why always the shit end of the stick for Irish nationalists. Always struggle and strife and unresolved grevience etc....?

Why aren't SF in London doing the job they are elected to do properly, so we don't always have to contend with the shit end of the stick.

Some kind of pride and an inability to face up to reality.

I remember Bloody Sunday so well and wonder why the media chose to give little account of the Ballymurphy massacre.It was a long struggle for the Derry families to get closure and why not the same for the Ballymurphy families.Im also saddened that with all the scandals in the Catholic Church that they dont seem to have any input especially as a Priest was murrdered while giving the last rites.Cardinal Conway was at his funeral in Corpus Christie.Was that the Catholic church,s total input.Did they help the families especially the murdered mother of 8children.This should not be a long struggle now as the Govt has seen the resiliance of the Derry families that they cant and wont be allowed to put British interests first.The truth from the British Govt and for them to take responsibility is the way foreward.Sending a minister to meet the families in a stuffy room in Stormount, whilst wearing an RIR wristband is an absolute isult and discrace.What support are the Families getting from Sinn Fein,the Irish Govt etc.Maybe they are getting good support from the previous mentioned.We all love the peace we have today but we cannot forget the Ballymurphy peoples right to truth and closure.May God guide us all in the right way regarding this unresolved massacre.
Justice and closure for the families of the Ballymurphy people is a basic human right.Could the Catholic Church please note only if you are doing nothing as Ive read nothing from you.
God Bless All
Joe