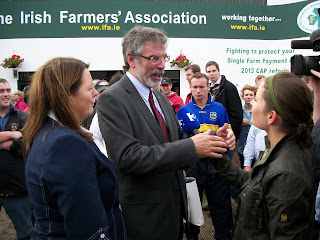 This blog was at two entirely different gatherings this week. The first one, down in County Kildare is the biggest event of its kind in Europe. I refer of course to the National Ploughing Championship – this year The European Championship.

It’s like the All Ireland crowd multiplied a few times and moved from Croker into the countryside.

‘We’re culchies’ a young lad proudly announced to me ‘from Mayo’. 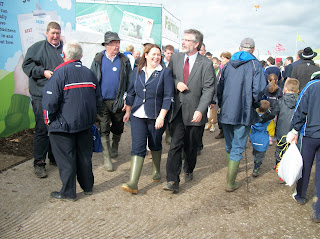 Rural Ireland! Most of us can trace our roots back a few generations to a rural place. And farming. In Ireland it could be clean and green. The demand for food never slackens. Good food. Michelle Gildernew – Agriculture Minister for the North – was on hand, full of craic and slagging, daughter of a farming family, at home here among her own.

Together we toured the tented city, meeting with the farming organisations and listening to their view of how our rural communities can be strengthened and our agricultural industry developed. Martin Ferris, a farmer himself among other things, including Sinn Féin’s spokesperson on rural affairs, joined us. He too, like Michelle is in his element. 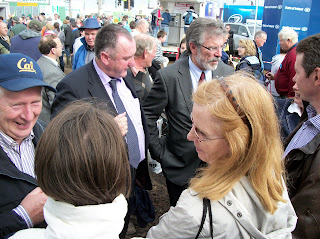 The ploughing competition itself is keenly contested. Competitors hoping for a clean cut, turn over acres of deep black loam and leave fields of straight furrows in their wake.

These few days in Athy are proof of what we are capable of. How rural Ireland can organise and be innovative, energetic, creative and forward thinking. Leading by example.

An away day at the Ploughing Championship for the empty heads of a government bereft of any good ideas of its own could be just the ticket if it was interested in stimulating the economy instead of just the banks. But then that would mean listening to the culchies. And this government listens to no one. It treats all of us, townies and culchies, the same. As people to be talked at. Instead of citizens to be listened and talked to.

Well done to all involved in this wonderful event. You do our country proud.

Well done too to the organisers of the Clinton Global Initiative. From Athy to New York, from where this blog is posted, is a relatively short journey in these modern times. And the energy at both events is not dissimilar. And the objectives are the same. They are all about improving the quality of life for people. The GCI was founded by President Bill Clinton. This blog is pleased to come here every year to learn and to listen, and sometimes to engage in discussions on poverty issues, equality, the environment, health and education issues, and conflict resolution processes. And to renew and develop contacts in this fine city.

But more of all this another time. For now it is time to catch a flight back again. My jetlag has jetlag. And your man gave me the cold just to complicate this whirlwind trip and I gave his regards to Broadway. But then again at least I got away from him for a few days. Hopefully I will sniffle my way over the Atlantic in time for the Aontroim County Football Final at Casement? Or maybe not? It depends on the wind.

In any case Naomh Gall Abú! 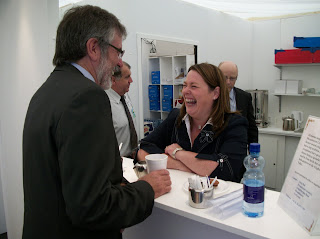 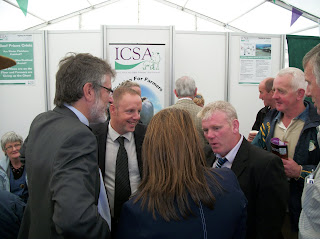 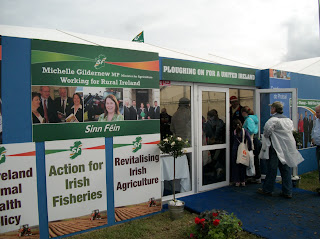 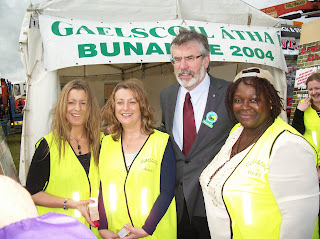 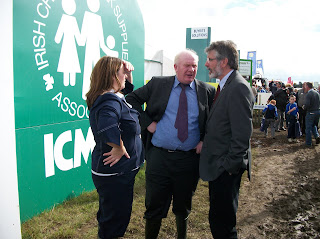 Well Gerry, I enjoy writing, to This Blog because of your truthful views. Your views of rural Ireland and Clinton's Global Initiative are right on the money. Food demand do never slacken, and this combined with poverty in the environment makes health and education issues a concern to Ireland and the world. The Irish ,If they are anything are energetic. The all Ireland need for our creative and forward thinking views. Leading by example, and taking the initiative for peace and world human right, this is our role in a free world.