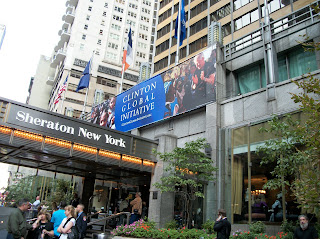 Kathleen from County Leitrim was delighted to welcome us again to Rosie O Grady’s on 7th Avenue. Michael behind the bar said: ‘Céad míle failte arís.’ He always greets us in Gaelge. Sheila from Mayo brought us our lunch.

In Rosie O Grady’s the staff are well used to comings and going. The last time I was there George Bush senior was eating spuds, cabbage and bacon. No one paid him much need. They take it all in their stride. Mayo and Leitrim men and women are like that. They give you their space.

Rosie O Grady’s is across the road from the Sheraton Hotel and Towers. Among other events the Sheraton hosts the annual Friends of Sinn Féin dinner each year – this year on November 4th. Last week the Clinton Global Initiative was in town and for four days the CGI took over the lobby and several floors, including the huge Metropolitan ballroom for its series of events.

This is the sixth year of the CGI. It held its first session in 2005. The idea is simplicity itself. To provide a location where business leaders, politicians, non-governmental organisations, activists and representatives of charitable foundations, can come together, talk about issues affecting people around the world and then make partnerships and commitments to take actions than can alleviate poverty or provide health care or education or water or sanitation and much more.

This is the key to its success - forging partnerships and making commitments. But as Bill Clinton asserts repeatedly the CGI is about more than words, it’s about deeds and actions. As a consequence, at the end of last week, the CGI had generated almost 2000 commitments for its six years estimated at $63 billion. This will impact positively on some 300 million people around the world. 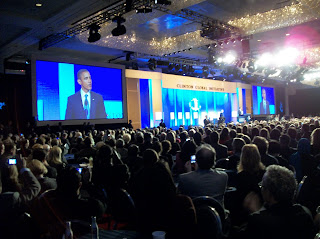 In practice this means for example, the CGI facilitating the creation of a new partnership of organisations which will support Palestinian women-led businesses in Nablus by providing training and services to increase skills and business knowledge; other participants have committed to investing in literacy and numeracy skills to low income rural populations; still others committed to promoting health and safety support for medical professionals in Tanzania; and there was a commitment to provide infrastructure, technical and logistics support for a small gynaecological and surgical hospital in Heart in Afghanistan.

This year the focus was on empowering girls and women; strengthening market based solutions; enhancing access to modern technology and harnessing human potential.

At one session I attended a contributor, the actor Ashton Kutcher, told delegates that it is estimated that at a time when most people would have assumed that slavery is a thing of the past, there are still 27 million slaves in the world. More now than ever before in human history. Most of these are sex slaves, and most – 80% are women and girls. There are apparently up to one million sex slaves in the USA with one third of these being children under 15.

The issue of gender bias was another major area of discussion, which in developing countries often leads to rape, HIV/Aids and early death. In Sudan and on the Rwanda/Congo borders rape is a weapon of war.

Pollution, education, communications and much more were discussed and commitments made to tackle them in specific regions. The disaster in Haiti was a special cause for concern.

So too was the need to tackle preventable diseases. One business committed to providing PUR packets – one ten per cent packet purifies one 10 gallon jerry can of water – which cuts down on cholera, dysentery and other water borne diseases.

Two million people, half of them children die each year from inhaling toxic emissions from open fires and polluting stoves. The US Secretary of State Hilary Clinton described how new solar power stoves can cut the number of deaths while reducing greenhouse gases and the health risks associated with the current system. The commitment is that the US in partnership with the UN Foundation will provide 100 million clean cookstoves by 2020 at a cost of $51 million.

But CGI is much more than this. It is an inspiring event. The expertise, passion and generosity of the people involved is uplifting. Women from remote African villages share platforms with Heads of State, millionaire CEOs and Hollywood stars – and something clicks!

As a result more people are motivated to do something meaningful on the issue involved. Bill Clinton is the most compelling example of this can-do spirit. He is persuasive, informed and motivational.

Little wonder under his leadership that when the CGI ended on Thursday evening there were scores of new commitments and another $6 billion dollars raised to help those in need. 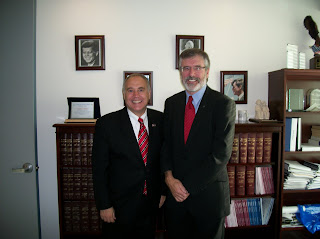 I also met the New York State Comptroller Thomas DiNapoli and the City Comptroller John Liu. My discussions centred on Pension Fund investment in the north and the opportunities for job creation.

Both Comptrollers reasserted their goal of providing additional investment for the north, over and above the pension funds already invested in business based here.

While the goal of the both Offices is to add value to the Pension Funds, Tom and John both understand the connection between investment and tackling inequality and disadvantage in the north.

So, our discussions were positive. New York Comptroller John Liu plans to visit Ireland in the next few weeks. He wants to come and see for himself the possibilities and opportunities.

I also spoke by phone to Senator Scott Brown about the undocumented Irish and in particular about the proposed E Visas which can provide a legal route for Irish people who want to work in the USA.

And finally, on Friday I was in Princeton talking about the Irish peace process, Irish unity and my view that no conflict is intractable. It was a packed audience and they listened intently and asked questions about the challenges of making peace.

That is my experience almost everywhere. People want peace. Peace demands justice. The Clinton Global Initiative makes a valuable contribution to this quest. 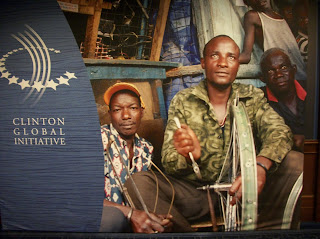 Thanks again Gerry,
I recall last years CGI event and you rundown of events. It looks like the worlds global economic change and the Political Headwinds and Recovery are part of the new social relationship. Our world seems to be coalescing. The New Ireland will need to fuse the different elemnts of change. The change and its implications for international economic governance. Again, Ireland should be a leader. In the end, it will be policymakers, regulators and adjudicators in this time of international economic change, that will create a New Ireland.

You seem like a good person and I have confidence that you will take what you got from this conference and applying it to making things better.

With all due respect, this blog post really reeks of political expediency.

I'm sure you would agree that one cannot possibly have any kind of meaningful discussion about any of the issues that fall under the CGI mission without first discussing how the very leaders present--and the governments and corporations they represent--have created and continue to exacerbate the very problems they've come together to "alleviate."

I'm sure the women in Palestine will be grateful for the funding and expertise, but their overall economic situation might be better alleviated if the US stopped blindly supporting Israel. Same goes for the hospital in Afghanistan. Sure, give them funding, but let's not start patting ourselves on the back for our contributions until we confront our role in creating the problems in the first place.