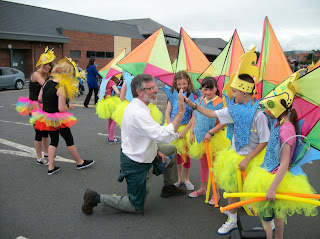 This blog is being compiled in the back of the car on the way to Lissadell in Sligo and a Leonard Cohen concert. What a busy life we lead. Especially during Féile week. Usually this blog doesn’t venture anywhere outside West Belfast during Féile but this year there are two exceptions. Yesterday a gang of us went to the All Ireland Poc Fada in the Cooley Mountains and tonight there is Mr Cohen. Your man reckons the Cooley excursion was a dummy run for the Poc Ar An Chnoc at Stormont next Saturday so it counts as work and tonight’s Sligo adventure is his effort to get Leonard for Féile next year so that counts as work as well. Such a yarn!

Leonard got honourable mention during Danny Morrison’s intro to Seamus Heaney’s wonderful tribute to Michael McLaverty last Friday. It was great to see Seamus and Marie Heaney in such good form. I have a little piece half written about that days events and will post it eventually. I am sure everyone was as mesmerised as me at the nation’s foremost poet’s presentation. Bhí sé go h’iontach.

Féile an Phobail is now part of the social fabric of Belfast city. Craic, ceol, drama, debate, book events, the arts in all their many forms, sport and good fun as well. Something for everyone. A great job has been done again this year by Sean Paul and the Féile team. The clár is mighty. And so is the talent which is on show everywhere. On Saturday morning in the Westwood Shopping Centre our young singers and dancers regaled a very appreciative audience. Fair play to Margaret McKeiran and her crew and to big Ivan who turns up every year to compere the show. But a special well done to the young performers. Sometimes our young people don’t get a chance. When they do – and Féile is the proof of this – they seize it with both hands.


The Cooley Poc Fada certainly was a great day out. We were blessed with great weather. Strange thing was, it was raining all around us. When we were on the southern slope of the mountain we could see the rain beating down on Dundalk Bay and across Louth and Meath. And when we were on the northern flank Carlingford Lough and the Mournes were shrouded in rain. But us? We was dry. And the countryside was absolutely beautiful. The going was tough for our clique. The Tír Éoghan representative, anxious about the rumours from Croke Park, collapsed on the heather and had to be revived by a passing Turf Lodge reprobate.

The competition was fierce. Mighty strokes by modern day Cuchullains. Graham Clarke, the Dún keeper was a worthy winner of the senior event. Two big victories in one day for An Dún. I missed the Camógs but by all accounts that also was brilliant. Patrica Jackman from Port Lairge triumphed. Bernard Dunne did the presentations. He was delighted with Dublin’s victory at Croker. Everyone involved in this Póc Fada competition is to be commended. There is something uniquely Irish and primitive and rugged and rooted about it. And fair play to Martin Donnelly who sponsors this event. He is also the main sponsor for our Stormont poc.

Martin would have enjoyed the Feile Carnival Parade on Sunday. Great craic. And again our young people excelled. There is a whole week of all this. If you get a chance join us. You will be very welcome.

There was other big developments. The Ballymurphy Massacre campaign got a boost when it won the support of Catholic bishop Noel Treanor. Remains found in County Monaghan may bring closure to the family of Charlie Armstrong. Alex Higgins – snooker legend and world champion died. Huge events for all these families.

That’s why we need music and sport and craic in our lives. So enjoy yourselves.

The Féile programme can be accessed at www.feilebelfast.com 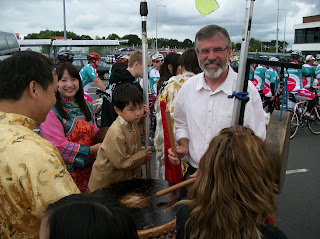 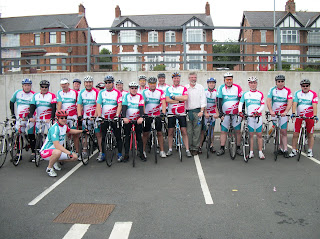 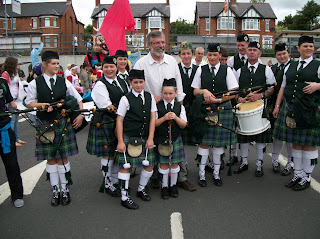 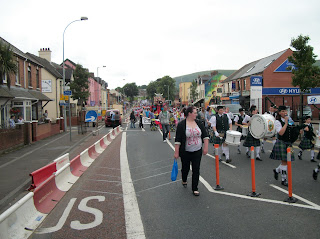 Ah, I was thinking on you after reading about Leonard Cohen pays tribute to WB Yeats in Sligo. I said "Gerry will find away to get to that" Leonard Cohen played before a crowd of 20,000 devoted fans at Lissadell House, Sligo.
I do have a poet friend in Omagh, Co. Tyrone, a nice little city. The windswept moors of county Tyrone, and Omagh, the county town center. I spent some time in Sligo,Cohen is a fan of Yeat’s poetry . Yeat's appointed a senator of the Irish Free State in 1922, he is remembered as an important cultural leader, as a major playwright and one of the founders of the famous Abbey Theatre in Dublin. Good to see you perpetuates the artistic heritage of Irish culture, Gerry. As Yeat's said: Being Irish, he had an abiding sense of tragedy, which sustained him through temporary periods of joy.
William Butler Yeats

It is really good to read and listen about all these events that create a nice sense of Irishness.

Feel sometimes though, that it is all very superficial and a bit airy fairy.

The Edward Carson fiasco must have been extremely daunting for so many people i.e. victims of the UVF
My da was a keen hurler, however, thanks to legislation no doubt carried out at the behest of people such as Carson, he could not even carry his hurl to the park to play.

I know people will argue that all of that is now part of the past.
In reality though it is not, human rights abuse still goes on here day and daily.
Prisoners are being stripped and beaten in Maghaberry prison.

This illusionary utopia will come to halt sometime.
In the meantime you should all be grateful the revolution you took part in was not the French one.