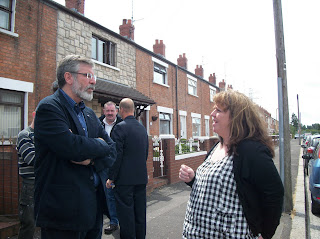 St James is a closely knit west Belfast neighbourhood bordered by the Falls Road, the M1 and the Bog Meadows. James Connolly lived in a house on the Falls Road, along the front of the area for several years. He left there to join the Rising in Dublin in April 1916.

Other parts of the district were built later in the 1920’s and perhaps 30’s. Much of the housing is made up of small terraced two or three bedroom homes. Once it boasted Celtic Park in its midst but that is now long gone, replaced by the Park Centre, a huge shopping Mall.

Like many other parts of the city St. James has suffered as a result of the conflict. It is disadvantaged with high levels of unemployment.

It is an interface area. The loyalist Village is just across the Broadway Roundabout and over the decades the lower end of the district has witnessed sectarian confrontations.

Last Friday night a large mob of young loyalists came across from the Village sparking a confrontation. Briege Brownlee, a local community activist and Sinn Féin Councillor and other residents rushed to the scene and their calm intervention avoided a potential major confrontation.

There is a part of St. James’s known as the ‘pitches’ which is a gathering place for anti-social elements, many from outside of the area. It is on the fringe of the neighbourhood and adjacent to the Bog Meadows and St. Louise’s School. It has been identified as a ‘hotspot’ and in recent months this blog and other Shinners have been meeting with the PSNI and local stakeholders about this site.

It was those from this ‘hotspot’ and others from outside of the district, who were responsible for the serious violence of Saturday and Sunday nights which terrorised local residents, many of them elderly.

There was drink and drugs involved and a small number of people belonging to so-called dissident groups tried to encourage the violence and were involved in bringing outsiders into the St. James area on Saturday and Sunday nights.

They attacked the PSNI and attempted to set up barriers across the Donegal Road. They also smashed their way into two local businesses and onto a building site.

Sinn Féin activists removed the barriers from the road and returned cash tills that had been stolen from the KFC outlet. They also confronted and challenged the orchestrators of the violence and will continue to do so.

I went into the area on Monday with Briege and spoke to some of the residents. They were very angry. One said to me: “It wasn’t anyone from the Village who broke into the KFC or the car wash business in the Park Centre, or looted or tried to erect barriers on the road.”

The message from these residents was very clear. They want an end to this behaviour. And they are demanding that those from outside of the district, including those representing so-called dissident groups, stay out of the neighbourhood.

Those involved are sectarian and include career criminals who have no interest in politics.

I would appeal to parents to ensure that young people do not get caught up in this unacceptable anti-social behaviour.

The PSNI used plastic bullets in the course of the weekends events. These are lethal force weapons which risk causing serious injury or death. The PSNI should not use them.

One positive in all of this is that there is now ongoing contact between community representatives from the Village and people from St. James. These efforts are replicated all across the city where community workers and others in loyalist and unionist working class areas are dealing directly with groups in nationalist areas. These efforts are about seeking to ensure that sectarian tensions are calmed. Briege tells me that these arrangements are working well in St. James. 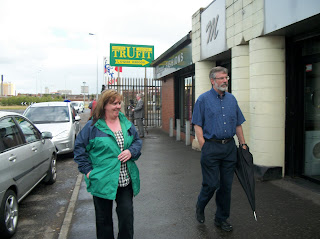 Hello Gerry, enjoy your proactive view of the problems at St. James.
Sinn Féin activists confronted and challenged the orchestrators of the violence and will continue to do so.
Few people are or can be capable of expressing opinions which differ from the prejudices of their social environment. I have been lucky to have suffered, in my life. Some people don’t realize in suffering there is great potential. As with West Belfast or Ireland, if you are deprived for any reason , that is politically, financially, socially or any other way,you can now set your mind in the right directions. The only way to survive is to improve, by being a better person or nation.
Gerry Adams is a survior and west Belfast ,as well and both with great potential. Is leor nod don eolach.