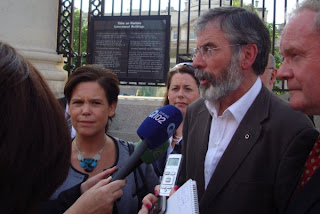 The focus of our conversation was the recent Westminster election and its implications; the imminent publication of the Bloody Sunday report; the need to ensure that the new British Coalition Government honours its obligations under the Good Friday and St Andrew’s Agreements; and the opportunity to develop the all-Ireland economy as part of the fightback against the current economic recession, and the Israeli attack on the aid convoy to the Gaza strip and the events surrounding the MV Rachel Corrie.

The Sinn Fein delegation made very clear our view that summoning the Israeli Ambassador to talks is not enough.

A clear message must be sent to the Israeli government that its constant breaches of international law must end. Consequently we argued very strongly that the Israeli Ambassador should be expelled.

This blog was not impressed by some news reports that Israeli might ease its blockade if international inspectors were able to examine any boats destined for Gaza to ensure they contain no weapons.

The fact is that much of what is currently on the Rachel Corrie, including cement and school equipment, pencils, and footballs is not allowed into Gaza under Israel’s illegal blockade. If boats are now to be diverted to Ashdod in southern Israel or to a port in Egypt what guarantee is there that these much needed humanitarian supplies will be allowed through?

So, today all eyes are on the 1200 tonne Rachel Corrie and its 15 passengers as they slowly sail toward Gaza.

This afternoon there was a debate in the Assembly which called on Israel to conform with international human rights norms, condemns the actions by Israel, accepts that nations have the right to defend themselves but also have a responsibility to respect and comply with international law; and called on the Israel government to ensure that “humanitarian efforts in Gaza are facilitated, that an immediate end to the blockade is effected and that the MV Rachel Corrie is given safe passage to Gaza.”

The debate was lively as unionists found various reasons to object to the motion. Under a procedure available in the Assembly rules unionist MLAs introduced a ‘motion of concern’ which means that whatever is passed is not binding. What it does mean is that the vote on the motion can not be taken for 24 hours or in this case until Monday morning.

By then we will know what has happened to the Rachel Corrie.

Tomorrow there will be a rally at Belfast City hall and no doubt elsewhere as well.

By then the fate of the Rachel Corrie will almost certainly be known.

One potentially positive development to come out of all this is the welcome news that Palestinian Authority President Mahmoud Abbas is to send a high-level delegation of Fatah and PLO officials to the Gaza Strip in the next few days.

Ending the divisions among the many Palestinian organisations, but in particular Fatah and Hamas, would significantly lift Palestinian morale and help increase international pressure on Israel.

President Abbas has also decided to honour all of those who took part in the flotilla by presenting them with Palestinian citizenship.

On a completely different note former DUP leader Ian Paisley and his wife Eileen were also in Dublin yesterday. They met An Taoiseach Brian Cowan, attended sessions of the Dáil and Seanad, had lunch with President McAleese in Áras an Uachtaráin, and visited the National Library and Glasnevin Cemetery.

The Paisley’s witnessed some rowdy scenes in the Dáil. Next week the Dáil was supposed to be in recess. However, the government then decided to take the bad look off TDs taking a week off by arranging for what one pundit described as a ‘makey-up working week consisting of a day and a half of waffle’.

There will be no order of business, no question time, no adjournment debates and no votes. They will apparently pass the time by reading out statements!

Opposition TDs, including the Shinners, got up and gave out to the government side for what is clearly a charade.

With Ian and Eileen looking on amused from the public gallery Caoimhghín Ó Caoláin suggested that having just watched the scenes in the Dáil that Ian might be saying to himself: “Why have I missed such craic down here in the past? I would have no objection if he went back and said, ‘the craic down there is mighty, we should go look again’.”
Posted by Gerry Adams at 8:58 PM

Irish ship the Rachel Corrie is 100 miles from Gaza
Page last updated at 20:43 GMT, Friday, 4 June 2010 21:43 UK
E-mail this to a friend
Printable version
Mairead Maguire is one of five Irish people onboard the MV Rachel Corrie
The Irish aid ship, the Rachel Corrie is less than 100 miles from Gaza, but Israel's foreign minister has said it will not be allowed to dock there.
Nine activists died on Monday when Israeli commandos stormed another vessel in the convoy.
Nobel Laureate Mairead Corrigan Maguire said they are due to reach the Hamas controlled enclave at 0600 BST UK time.
Irish Foreign Affairs Minister Micheal Martin said the ship should be allowed to proceed to Gaza.
"Those on board the Rachel Corrie have made clear their peaceful intentions and have stated that they will offer no resistance to Israeli forces.
"Based on these assurances, there can be no justification for the use of force against any person on board."
Mr Martin said he had reached agreement with the Israeli government to allow the vessel dock in the Israeli port of Ashdod, but it is believed that the activists declined the offer.
On Friday, crew member Jenny Graham said they remained determined to dock in Gaza.
"With regard to the suggestion that we have been negotiating with Israel about docking in Ashdod, again this is untrue.
"The Israelis have not been in contact with us. We remain as committed as ever to getting our 1,000 tonnes of aid and supplies to the people of Gaza," she said.
On Friday the Northern Ireland Assembly held an emergency debate to discuss Israel's storming of the aid flotilla bound for Gaza.
MLAs debated a motion calling on Israel to end the blockade and allow safe passage for the Irish ship, Rachel Corrie.
The debate ended after a petition of concern was presented by Unionists. A vote will be taken on Monday.
Determined
The emergency debate was supported by at least 30 MLAs, the number required before the assembly can be recalled in this way.
Gerry McHugh, who was one of the two Independent Assembly members who had forced the debate, said.
"A great many Israelis want peace, but it is the inconsiderate actions of the present government, seemingly determined to pursue a path of confrontation which is making this prospect more distant.
"We know from our own history that dialogue and discussion leads to a more sustainable and advantageous outcome in the long run," Mr McHugh added.
"If there is any part of the world that can show how compromise can change hearts and minds, it is here."
However, the DUP's William Irwin said it was "nothing more than a publicity stunt".
"The situation in Gaza was raised in the assembly chamber on Tuesday and there is absolutely no need for another separate debate to be called on a day when the assembly is not even sitting," he said.
"At a time when we are facing massive cuts in public spending there are a huge range of more important issues which should be concerning public representatives in Northern Ireland."
Nine civilian activists were killed after armed forces boarded the largest vessel carrying aid to the Gaza Strip on Monday.
The activists were attempting to defy a blockade imposed by Israel after the Islamist movement Hamas took power in Gaza in 2007.
Organisers of the flotilla said at least 30 people were wounded in the incident. Israel says 10 of its soldiers were injured, one seriously.
Israel had repeatedly said it would stop the boats, calling the campaign a "provocation intended to delegitimise Israel".
It said it allows about 15,000 tonnes of humanitarian aid into Gaza every week.

I started to write , God speed Rachel Corrie and than I just read this "Rachel Corrie international aid ship sailing to the Gaza Strip was intercepted on Saturday morning by Israeli navy, ..." As with Rachel Aliene Corrie crushed by a bulldozer on the Gaza Strip at the age of 23, I feel somewhat like that.

In December 2008, the Israeli Defence Force attacked Gaza. Around 300 children were among the 1,300 Palestinians that were killed.

After the ceasefire, BAFTA-winning filmmaker Jezza Neumann arrived in Gaza to follow the lives of three children over a year.

Surrounded by the remnants of the demolished Gaza Strip and increasingly isolated by the blockade that prevents anyone from rebuilding their homes and their lives, Children of Gaza is a shocking, touching and uniquely intimate reflection on extraordinary courage in the face of great adversity. this is what the MV Rachel Corrie was about.