THE LAST OF THE SUMMER WHINE. 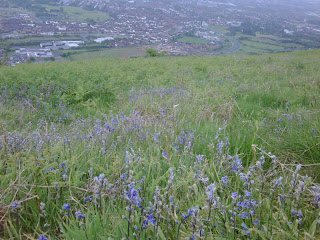 Bluebells on the Mountain


‘The good weather puts everybody in good form’ your man remarked.

We were sitting in the Hatchet Field. Belfast sprawled below us. Its narrow terraced - peace wall bisected ¬- streets, new apartment blocks, church spires, old mills stretched before us, until yellow cranes dominating, it dipped its feet into the Lough. In the distance the coast of Scotland shimmered in the clear warmth of a fine June day.

Your man was master of all he surveyed.

‘Thon’s our house’ he said pointing down at the Murph.

I ignored him. The mountain slope was loud with bird song. All around us a carpet of late bluebells almost on their last legs, gave way to verdant green young bracken and other ground cover which had replaced the scorched stubble of recent gorse fires. The mountain had healed itself from the hurt inflicted on it by morons.

‘When I was a wee lad we used to pick blue bells and bring them home to my Ma,’ your man continued.

‘So did I. She used to put them in a milk bottle on the scullery window’ I replied.

‘You mean the kitchen’ your man corrected me.

‘No…. I mean the scullery’ I said. ‘And there is a place up behind us where we used to get wild strawberries.’

‘In our house these days we have a kitchen. In those days we had a scullery. I don’t call our kitchen the scullery do I?’

‘Nawh you don’t’ he eventually conceded.

‘Well if I don’t call our kitchen the scullery I’m not going to call our scullery the kitchen. I call it a scullery because it was a scullery!’

‘You don’t need to take the needle’ your man retorted. ’youse Falls uns always cry poverty. I was only reminiscing about the bluebells. You knew my ma kept the ones I got her in a vase in the kitchen but you just wanted to get in your wee bit about the milk bottle and the scullery. You’ll be telling me next about the cold water tap and the toilet in the yard’.

‘Well.. why shudnt I?’ I was hurt by his sharpness. ‘ Thems the way things were’.

‘They are for some people’.

‘But not for us! This week is a good week.’ Your man raised himself up on his elbows. ‘Luk’ he continued, ‘when you were here as a wee lad collecting wild flowers for your mammy did you think you wud do all the things and see all the things you’ve seen’

‘No’ I conceded, sitting up from where I sprawled beside him.
‘You’ve been walking these hills for over fifty years now. On and off?’

‘Well you know you’re not going to get another fifty years’.

‘Your bum’s a plum’ he scoffed. ‘and you know it. The point is you’re lucky to be able to sit here on this fine day and look down on all this.’

He waved expansively at the vista which surrounded us.

‘The point is to appreciate it all. There is no use whinging and whining all the time.’

‘Luk’ I turned to him ‘I’m the one that always appreciates it all. You’re usually the caster upper, the contrary one, the dark cloud. And now you’re starting to get on my wick. You get on your soap box just because I used the word scullery’. 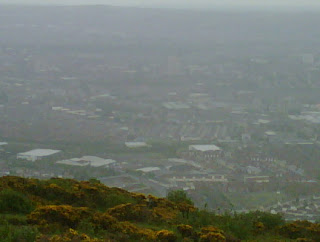 I was really exacerbated.

‘And because my Ma put bluebells in a milk bottle. It’s because of things like that that I really do appreciate how things have improved.’

‘I was not’ I protested.

‘Well chance wud be a fine thing’ he suggested with a sigh. ‘The point is to live in the moment. Listen to the birds. Breathe the air. Stop gurning. Live in the moment. And appreciate it. You were all set to launch into the five sorrowful mysteries. All set to ruin this lovely day’.

I turned away in frustration.

‘Wud you ever give my head peace? How cud anyone enjoy the day with you givin off about everything. You’re like an oul doll.’

‘That’s sexist’ your man shot back.

‘Aye’ he replied. ‘you’re a pain in the ass. Can’t even have a discussion without you taking the needle. It’s well seen you’re kitchen house reared.’

The good weather really does put everyone in good form. We tramped off together arguing furiously just as we did when we were only ten years old. The more things change …….. Meanwhile the birdsong continued unabated. The flora and the fauna ignored us. The mountains were silent witness to our bickering.

And Belfast basking below us, paid no heed. 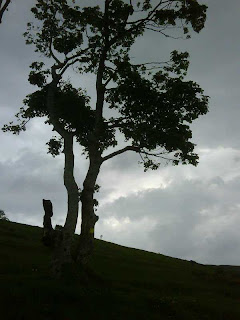 You bing to me the lovely area , you have , almost a special secret. My visit to the north of Ireland ,have been some of the best times in my life, in the last few visits ,more so than ever. I almost hate to see any news at times , the secret is out more people take notice , the good with the bad. The Secret is out , you have a special place Gerry , maybe the center of the world. I read that Ireland could have been Atlantis a legendary island first mentioned in Plato's dialogues Timaeus and Critias. A place of great minds and small scullery rooms, were children learned about life and dishwahing, than when on to create wonderful spring days.