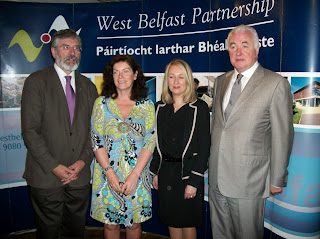 Last Friday I attended the launch of this years Aisling Bursary initiative in the Culturlann in west Belfast. The Bursaries are a collaboration between the west Belfast Partnership Board, the Belfast Media Group, and local businesses.

Money is raised and is then distributed to local people who want to participate in education programmes or who need help in meeting the costs of training and upskilling.

It is an amazing initiative which at its core recognizes the importance of education and of personal empowerment, and acknowledges talent and effort.

The amounts of money are not huge. £1000 for a full bursary £500 for a part time course but in difficult financial times it can make a difference.

The bursaries are especially about helping those who face significant barriers, including family circumstances – they may be a carer for example – or have a disability or just not have the money to undertake a course they want to do.

This is the 11th year the Bursaries. Since they were first launched in 2000 over 400 west Belfast people have benefited from its grants. And over £360,000 has been paid out. This is a lot of money to come voluntarily from a community that is itself disadvantaged. It is a measure of how rooted the local businesses who contribute to the bursaries are in the west Belfast community.

This year a number of Bursaries have been set aside for St. Mary’s University College and the University of Ulster. And there will be a particular focus on trying to raise sponsorship for 5 bursaries that will be specifically targeted at the Shankill area.

Geraldine McAteer who is the Chief Executive of the west Belfast Partnership Board and Terence Brannigan who is the Chair of the CBI in the north, both spoke at the Culturlann event of the particular problems facing parents and young people on the Shankill.

Geraldine referred to statistics she had sourced which showed that of the 2160 west Belfast students enrolled in Higher Education institutions in the north and Britain, only 165 are from the Shankill, Glencairn and Highfield wards. Only 20 were from the Shankill ward.

In recent times as part of a strategy to secure additional resources for the Shankill and Falls I have met with the principals of pre-school and primary schools on the Shankill. They related the many difficulties faced by families and children on the Shankill, especially the high proportion of children with speech therapy problems.

The principals explained that children were not being read to or being taught nursery rhymes at home they way they once were and that this is affecting their speech, as well as having an adverse affect on their reading and learning skills.

They also referred to the poor diet that many have and in particular the impact too much sugar is having on their teeth and consequently also on their speech.

So, as Terence Brannigan acknowledged, the five bursaries that the organisers are seeking to set aside for Shankill are only a first step. In terms of the Shankill ward it would amount to a 25% increase but next year it will hopefully be more grants to more students and the year after that more again.

This new initiative within the bursaries is a mark of the positive style of the west Belfast community and the fact that it looks beyond sectarianism and division.

In Irish we say mol an óige agus tiochfaidh sí – praise the young and they will blossom. That’s the goal.

This is about education as a doorway, a route, out of poverty. It is about personally enriching and empowering individuals but it also helps and inspires the community.

None of this would be possible without the efforts of those who had the vision – the Aisling – to take the idea of a bursary and to turn it into a practical and effective way to help people.

But neither would it be possible without the generosity and vision of many local businesses and sponsors.
Posted by Gerry Adams at 9:33 AM

The positive style of the west Belfast community. Great people develop great communities. Small grants develop into better lives. Words like Micro-Investments,are used or on the International level Macro-Investments. Our "global macro" investment strategy has been at times, not to the best interest of the needs of people. The Belfast style, brings the real world into view. Real people giving to real people , a wonderful commitment to the common society as a whole. As a Educator , I feel very deeply impressed. From small things great minds and people move on to a better life. Within our life our Education changes us and with that we change all things.