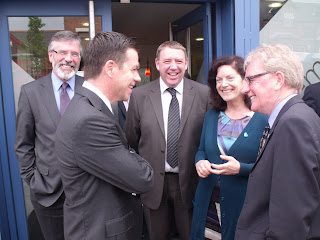 The new British Prime Minister David Cameron arrived in Belfast today for his first visit since he took up his new job.

Before I went up to Stormont House to join the other local party leaders in meeting him I travelled out to Dunmurry to meet Declan Kelly the US Economic Envoy to Ireland who is here for several days of meetings and events.

Yesterday he was in Newry and Derry and this morning he spent time in the City Hall with the Mayor Naomi Long.

This morning he was visiting Lightstep Technologies who have developed what they describe as the “world's first Situation Sensitive, telemetry reactive Intelligent Evacuation System.”

Sounds impressive and it is. I have had several meetings with the management of this locally based company and have been impressed by their drive and determination. I was also impressed by the technology they have developed to save lives.

Their goal is to introduce an evacuation technology system into buildings, sea going vessels, aircraft, in fact anywhere people work, live or play in large numbers.

It’s an amazing product and in previous conversations with Declan I had urged him to meet the management.

Today he had an opportunity to see the evacuation system at work and speak to the senior management. 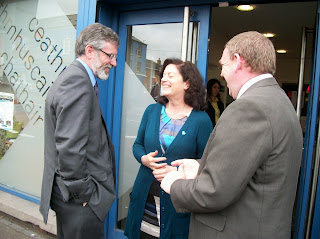 Later I met Declan again at the west Belfast Partnership Board along with Geraldine McAteer, Gerry McConville of the Falls Community Council and Jackie Redpath of the Shankill Partnership Board.

Then it was off to Stormont Castle to share some of Martin McGuinness’s birthday cake before my meeting with the other party leaders and David Cameron. 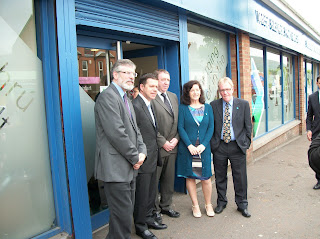 You look like a man who is at the top of his game, nice face on Gerry.
I passed on that information about Lightstep Technologies to my Gov.connection,sounds like a good product, thinking ahead. I give a great Birthday best to Martin McGuinness Breithlá sona duit, may he have many more.
With business comes investment and with money comes jobs and family life. My best to your family, Síochán leat Gerry

The quick visit by the Eton educated blue blood Cameroon shows clearly how it it time to end this shambles of British Ministers flying in for a photo visit and then of to Europe.The People are not that easy fooled.

Both sides of the divide in the North can have no times for this farce, it is time for both sections of the community to realise that unity is the only way forward.

Cameroon must give fiscal reponsibilty to the Stormont NOW

I wish also Breithla shona to Martin McGuinness. He is a leader of men, a man for all seasons, a credit to his county and a national asset like no other.

I also hope that he saved you a piece of that cake and maybe a bottle of guiness or two as well.

Is Naoimi Long now an MP, a MLA and Mayor of Belfast. She'll have an impressive CV to show, if she ever is looking for another job.

The new paradigm of world development is upon us and Ireland is a place that has a lot to offer I'm sure.

Great to see a Sinn Fein delegation visited Maghaberry. Keep on top of that, consistency and perseverance will bring justice and human rights to the Gaol and reasonate through society. No-one should have to go through what Bobby Sands and Joe McDonnell, and Mary Doyle and the women in Armagh gaol, and yourself and all those people went through, ever again.

Paul, you only have to have a long look at what is going on here and you will see for yourself the people can be fooled.

There are so many farces being played out here day and daily that people cannot keep up!

It really does not matter who has the fiscal responsiblities, here or across the water, the poor people will be screwed either way.
"Let them eat cake" Hopefully not the Deputy's.

All this claptrap of economic investment, is just that.
America with it's neo liberal economics will always reap more than it sows.
Most countries have done well to keep them out. Those who did not and I could fill a page with them suffered dire consequences as a result. Unfortunately our post revolutionaries have had their palms well greased to let them in.
My granny used to say "There's no such thing as money from America"
I believe she will be proved right.


One last word about farces, any statements on the plight of the republican prisoners?