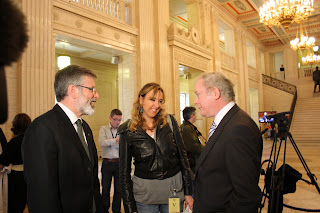 Last Wednesday evening the MV Rachel Corrie sailed out of Dundalk harbour at the beginning of an historic journey. Its goal is to deliver hundreds of tons of much needed construction, school and medical supplies to the besieged people of the Gaza Strip.

Irish woman Caoimhe Butterly is one of the main activists behind the plans for a flotilla of eight ships to break the Israeli siege by delivering supplies by sea to Gaza. This blog renewed its acquaintance with Caoimhe last April when a delegation of Shinners visited the Middle East and spent two days in Gaza. Caoimhe had worked during the Israeli assault on Gaza the previous December and January as an ambulance helper.

In the past she has worked with victims of aids in Zimbabwe and with the homeless in New York. In 2002 she was shot by an Israeli soldier in Jenin and spent over two weeks in President Arafat’s compound in Ramallah when it was under siege by the Israeli’s.

She is a dedicated activist for human rights.

Last Monday Caoimhe visited me at Parliament Buildings. She told me how the Free Gaza Movement had purchased the 1800 tonne MV Linda at the end of March from the Irish government.

The ship was built in Germany just over 40 years ago and for the last ten years had been bringing timber from the Baltic to Dundalk.

In July last year the company which owned the ship went out of business and the crew was abandoned to its fate. The International Transport Federation and SIPTU investigated the circumstances and found that the crew had not been paid and were being treated disgracefully by the ships owners.

The MV Linda was seized and auctioned by order of the High Court in Dublin following an application by International Transport Federation inspector, and SIPTU. It has been in Dundalk harbour since then.

At the end of March the Free Gaza Movement bought her at auction for €70,000. Proceeds from the sale will be used to pay arrears owed to the, mainly Ukrainian, crew.

The Free Gaza Movement, together with the Turkish humanitarian organisation IHH – the Foundation For Human Rights and Freedoms and Humanitarian Relief – the European Campaign to End the Siege of Gaza, the Perdana Global Peace Organisation from Malaysia, the Greek and Swedish Ship to Gaza campaigns, and the International Coalition for Lifting the Siege on Gaza, they are organising a flotilla of eight ships to sail to Gaza with supplies.

The flotilla – of three cargo ships and 5 passenger ships - will be loaded with up to 5,000 tonnes of supplies and 600 international passengers and media who will make the perilous journey to Gaza. Among those participating will be Sinn Fein TD Aengus O Snodaigh. 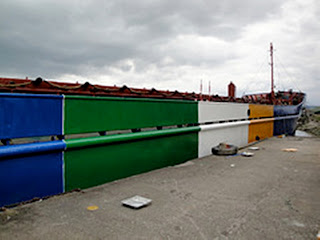 For the last 6 weeks the MV Linda has been tied up at Brown’s Quay being repainted and refitted, including having a large tricolour painted along her side clearly identifying her as an Irish humanitarian ship.

Caoimhe and her friends have been busy gathering a range of supplies desperately needed by the people of Gaza. Other supplies include pharmaceuticals, wheel chairs, paper and toys for the children. 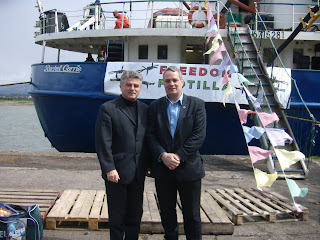 On Wednesday morning the MV Linda was formally renamed the MV Rachel Corrie. Aengus and Arthur Morgan TD were on hand to celebrate the event. The ship is now named after Rachel Corrie, a 23 year old American activist from the International Solidarity Movement who was killed by an Israeli bulldozer in March 2003. Rachel Corrie was one of a number of activists acting as human shields trying o prevent the Israeli Army demolishing the home of a Palestinian family. 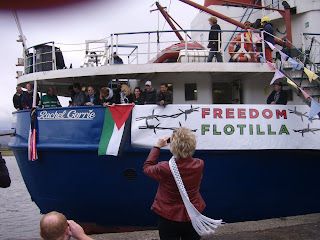 The MV Rachel Corrie about to sail

The MV Rachel Corrie is now on her way to the Mediterranean. There she will join with the other ships of the flotilla and make for Gaza. They will bring much needed aid but in reality much more is needed to rebuild the homes of thousands of families and the shattered economy of the Gaza Strip.

The continued siege of Gaza by Israel is an affront to the International community. The governments of the world have failed to defend the rights of the one and a half million people of that small imprisoned strip of land. It has been left to human rights organisations and activists like Caoimhe Butterly to try to help. It isn’t good enough. If the US and European Governments and Russia and others are serious about peace in the Middle East then they must end the siege of Gaza. 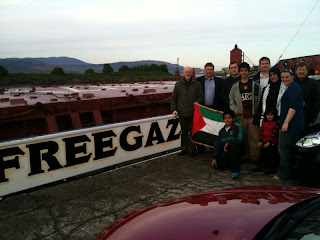 Yes, Gerry it seem to be all about human rights . The Irish have the experience within that area, the right view of human right. It is human rights abuses in Gaza resulting from the Israeli blockade.The situation in Gaza is truly a humanitarian crisis. This is a completely unjust that an entire population should be subjected to imperialist mentality of siege conditions of this kind. Only lifting of the blockade and the opening of the border crossings to normal commercial and humanitarian traffic is appropriate. The international community is at stake in Gaza,truly a humanitarian crisis. Good works Gerry

It is an awful inditement on the EU alone that people from Ireland and elsewhere have to resort to these type of measures to ensure that innocent people are fed.The people of Palestine deserve much more than this. They deserve Freedom.Education, Decent Housing,
a nation to build.

We in our home try to boycott as many products produced in Israel as possible and I would call on all to do likewise.