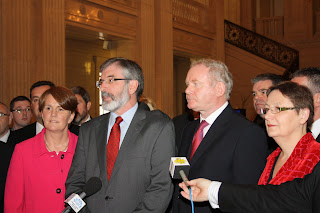 It was also another good day in the peace process. It was a day we were told would never happen. It just goes to show; you should never say never or never, never, or never!

Policing and justice was one of those hugely difficult issues that couldn’t be sorted during the Good Friday Agreement negotiations. The governments and the parties established the Patten Commission to deal with policing and the Criminal Justice Review to deal with criminal justice.

We all then spent the intervening 12 years trying to chart a course through the party politics, the objections and the machinations of the vested British security and intelligence interests in the political system, to get to today. It was a torturous process.

The unionist parties vehemently objected. At one level this was strange given that it was the removal of these powers by the Heath government which led unionism to collapse the Stormont regime in 1972. But at another level unionists also knew that this was one of those key issues of change. So, they tried to minimise or block efforts to ensure that any new policing and justice arrangements were free from partisan political control and democratically accountable.

Transferring powers from London to an accountable power sharing Assembly in Belfast was the ultimate prize and was therefore not something unionists wanted or were easily going to be persuaded to accept.

The SDLP position was entirely self serving and shallow. If the Shinners were for it they were against it. Almost 10 years ago the British passed the Mandelson Policing Act. Seamus Mallon and his friends took the view that that was as good as it was going to get. They claimed that there would be no more new legislation on policing. And in order to try and get one jump ahead of Sinn Féin they joined the Policing Board and harangued Sinn Féin for refusing to.

But the Shinners refused to acquiesce and took the British and Irish governments through a lengthy and complex process of negotiation until new legislation had indeed been secured and more changes achieved to policing and justice arrangements.

And by then our focus was firmly on the transfer of powers. This was crucial to Sinn Féin engaging with policing.

Once again the naysayers, and especially the SDLP said there was no chance of the transfer of policing and justice powers being agreed by the DUP and Sinn Féin. And the unionists for their part said not in a political life time.

But the agreement at Hillsborough in February saw a time table for transfer. Today David Forde was appointed Minister of Justice.

Strangely enough those parties which whinged and gurned the loudest about what they called ‘carve up’ politics were the most eager to have the ministerial position.

The SDLP just failed and then sulked in their corner.

Just past midnight into Monday morning a large bomb exploded outside Holywood Barracks not far from Parliament Buildings. Obviously someone thought that this action would rock the political institutions.

Another mistake on their part. Today’s vote in the Assembly is evidence of the durability of the political institutions.

Yes, the peace process has been challenged but it stands strong and is moving forward.

It won’t be deflected by those who put self interest above the needs of the people of this island. The peace process has brought about enormous political changes. It has transformed the situation on this island, and in particular here in the north, in a way unimaginable not that long ago.

So, today, for the first time since partition there is a Justice Minister who is accountable to a locally elected power sharing Assembly, representative of the citizens who live here. The north never had an acceptable policing or justice system.

The Good Friday Agreement has changed all of this. There is still work to be done but this blog is very pleased with today’s progress.
Posted by Gerry Adams at 10:13 PM

Yes Gerry, I agree, it is another good day for the peace process. Sinn Fein have represented and served the Irish people well. You have taken the weight of the democratic deficit of partition on your own shoulders and have brought about this day, for everyone.

I forgive them today Gerry, for what they have done and what they have failed to do and I will be prepared to live and let live, so that we can work on the future together and not be seperated one from another through hostility and other unresolved stuff.

Can we get there? I think we can. And Sinn Fein are the party that will get us there.

Sometimes gooddays can be far and between,but you have had a few of late Gerry.The Good Friday Agreement has changed what is acceptable policing or justice systems in the North. Only with Sinn Féin engaging with policing political institutions has this been brought about.The long dark night and empty words ,empty talk dwarfed limbs of rain and hardened lips the ambitions of marble ,are now in the past,or set aside. A store-house of anecdotes ,emulators of this time and place that catastrophes became and now went.The face of conflict , gravely authoritative gaze to the prehensible small hands now unconquerable. Thank again Gerry

Kudos to you and Sinn Fein! And you're certainly right about never saying never. After all, the world was flat until someone took a boat trip.

I think Ms Ritchie has just blown it for the SDLP! The SDLP will lose South Belfast, Sinn Fein will lose Fermanagh. The one bright side to this is the likelyhood that it should lead to Ritchie losing South Down to Sinn Fein, even with Ms. Ruane as a candidate! The SDLP will never recover, well done Ms. Ritchie!!!

A Ghearóid a chara, bhí an óráid a thug tú i nDoire ar fheabhas. Will you please put your keynote from the other night in Derry up on the blog? I just got a copy emailed to me and it's a cracker.

I have read all the comments and agree with every thing that has been put forward my main concern is the up coming elections, if the tories get in ( God forbid!) how does the peace process go with the dup and uup cosying up with the tories will there be a few spanners coming out to cause problems or have you gone to far for them to be a pain in the butt!!