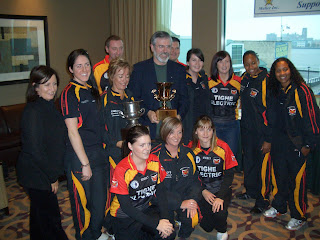 To Wales this week for a meeting of the British-Irish Parliamentary Assembly in Swansea. This blog was never in Wales before.

My jetlag had jetlag as we journeyed forth in the rain from Belfast International Airport. My body clock was still on Philadelphia time. But this blog does not complain. That’s your man's prerogative. One gurner is enough in any entourage. In fairness he was in surprisingly good form. He likes Tír Eoghain women. So he was extremely pleased with my photos of the very successful Mairead Farrell Women’s Football team. 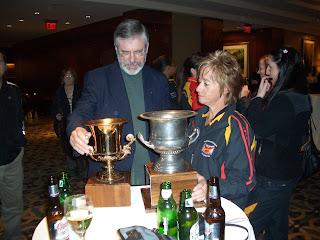 Based in Philly these young athletes have had a very successful season. We met last Friday. A Doire woman, a clatter of American ladies and a formidable line out – I nearly said line up – of Tír Eoghain women brought silverware, twice, to a very worthy team. Mairead would be delighted. Well done to everyone involved and to Orla who made a very fine speech. Thanks for the geansaí.

It’s great to see Gaelic games prospering throughout the diaspora. I told our friends about the Aontroim ladies success. They send comhghairdeas to their sisters. Mná na hÉireann abú. 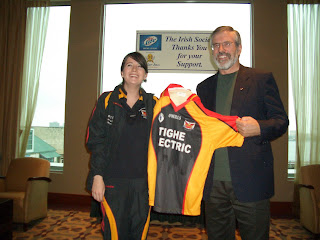 Being presented with a geansai from Orla Treacy

In Wales meantime it rained and rained and rained. I like rain. It’s part of what we are. I also like Harry Secombe. He is Welsh. He is dead now, God rest him. Your man has one of his CDs. He used to do a religious programme on British television on a Sunday - Harry Secombe not your man - and I really liked the singing bits. He was also in the Goons.

Spike Milligan was my favourite from that line up. He was Irish. He was also a comic genius. So was Harry Secombe. But he got religion your man says. And who could not laugh at Peter Sellers in the Pink Panther? I would liked to have met Spike Milligan.

Your man also reminded me of another Welsh singer. The rugby guy. He told jokes and sang and carried a giant leek with him on stage as he sang rugby songs. I liked him as well. But I can’t remember his name.

And when I was a teenager I was very taken by How Green is My Valley a very fine novel, later a decent film, by Richard Llewellyn. I was reminded of that as we made our way from Bristol into Wales. The bilingual signage along the motorways was a treat.

So too was the bilingual nature of the Assembly. Tri-lingual when we arrived. It’s great to hear native languages without the usual chorus of negativity and bad manners.

We and the Welsh have a lot in common. Welsh or Breathnach – the Irish for Welsh – is one of the most popular surnames in Ireland. So that tells of the human traffic between our nations. Your man says Saint Patrick was a Welshman.

Of course we also had the Welsh Guards. I reminded the Assembly that this British army regiment guarded us when me and your man were poor internees in Long Kesh. They also killed Hugh Coney, a friend of mine and a fellow prisoner, when a group of unarmed internees tried to escape. So our shared history has a jagged edge to it.

Our shared future is a different matter entirely. Based on respect, independence and freedom, the future can only mean a better relationship and mutually beneficial connectiveness for all the people of these islands. Speed the day.
Posted by Gerry Adams at 12:39 PM

Good old Spike he was the best

I don"t suppose Richard is the gurner that you are referring to. E..F.

The Women Hunger Strikers of Armagh Prison and the successful Mairead Farrell Women’s Football team , seem so far in time. The European Court of Human Rights and the sometime seem like the Goon show,I would have like to have met Mairead Farrell and you Spike Milligan. I been lucky in having met some will know people. One of the stories I do enjoy is "How Green is My Valley" Yes, the Welsh have a lot in common with the Irish people and others. Lets all hope that the Human Rights and the future of the Island show a common ground in what must be done.
Nice post Gerry, you sound like your feeling well , good, keep well.