A Blog for all Seasons


A Blog for all seasons

Autumn has arrived. No bad thing. With all the talk of global warming and
glacial melt down it is reassuring to sense autumnal evenings closing in
and to know that there are certainties yet in the world.

About ten years or so ago I got lost in the seasons. I was planting a lot
of trees at the time. Native species. Ash, holly, blackthorn, beech, oak
and one or two other smaller bushes. I also put in a few apple trees. In
memory of old friends.

As culchies will know, you should plant trees in the months with an ‘R’ in
them. From September to March for those of you who are without a calendar.

By the way the slang word culchie comes from County Maigh Eo, from the very fine town of Coillte Maigh or Kiltimagh.

So for the period of intense planting, maybe about two and a half years, I
lived in the seasons. The way farmers do, I guess. Autumn, Winter, Spring
and Summer became my measurement of the year. Seasons replaced months and weeks.

I also cultivated a lot of seeds. Ash and Sycamore among others. My
favourites were Rowan or Mountain Ash and Chestnuts. I got some Rowan
seeds in Chequers when MI5 weren’t watching. They are grand trees now,
flourishing and producing their own fine Irish berries.

Chestnuts are easy. Crann Cnó Capall, they come originally from Baltic
climates where the soil is much colder than the Irish variety. So the
cheesers take greatly to our slightly warmer mould, pronounced in Ulster
with a silent ‘d’. Chestnuts are very easy to grow. And easy to get.

I have a few secret places which I share only with the small people in my
life. Even your man isn’t in on this sceal. Lesser mortals gather in
parklands and estates to throw sticks or stones at giant Chestnut trees in
annual efforts to dislodge cheesers from lofty branches. We slip to where
we can harvest our own windfall. Snobby people call them conkers.

Snobby people also play a game which they also call conkers. We call it
cheesers. A cord threaded through a chestnut allows you to dangle it from
your hand while your opponent hits it with his man, also threaded with
cord. When I first instructed our first small person on how to play this
game she challenged me for calling the cheeser a man.

‘How do you know its not a girl?’ she asked, not unreasonably.

Funnily her sister made exactly the same point years later. Anna will
probably say the same thing when her turn comes.

When I was at school cheesers were all the rage at this time of the year.
I once had a twenty fiver. Your man says he had a fifty two-er but I
doubt that. Some boys used to put their cheesers up the chimney to harden.
I don’t play cheesers any more. Not seriously the way I used to. It isn’t
that I wouldn’t have another go but unless the small people in my life
take it more seriously I’ll stick to growing them.

Every cheeser is a potential tree. I have forty six cheesers waiting for
planting. So I’m glad its the season of Autumn again. Autumn is a short
season of mellow fruitfulness. Then before we know it the days begin to
turn again and winter gives way to Spring when everything with any
ambition at all screams ‘Yahooo.’

I hope this Autumn’s cheesers are very ambitious. I can’t wait for them
to scream ‘Yahoo’. 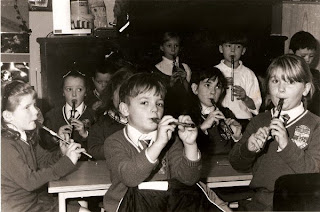 And finally, Comhghairdeas to the pupils, staff and parents of Gaelscoil Bharra in Cabra, who along with Dublin based Rhythm and Roots Band Tupelo, have reached number 7 in the Irish charts with ‘Cá bhfuil ár Scoil’.

Gaelscoil Bharra is an Irish language school which was founded 14 years ago and today has over 220 pupils. This Blog has visited Scoil Bharra a number of times and can testify to the great efforts by the school management and parents and local representatives, to get successive Ministers of Education to deliver permanent buildings for the children.

What value the Celtic Tiger when this fine school is still housed in prefabs which are overcrowded, poorly heated and where sanitation is second-rate.

This can be done by:

In Texas, we have pecans everywhere. One of our friends has a prolific pecan tree, and she always invites me over this time of year to help clean up her front lawn. Pecans are everywhere! You can't pull the car into her driveway without hearing the crack of pecans under the tires, and you can't take a walk on her lawn without stepping on them. There's plenty for me, her, and the neighbors to walk away with bags of them, and still there are more on the ground! Time to bake some pecan pies.

I enjoy your love of nature Gerry, as I also do. Maybe Carl Sandburg tied together by the autumnal equinox,the world of change."Under the harvest moon…
Death, the gray mocker
Comes and whispers to you
As a beautiful friend
Who remembers." and Three Pieces on the Smoke of Autumn "I lean on an ash and watch the lights fall, the red ember glow…
Not any hate, not any love.
Not anything but dreams.
Brother of dusk and umber.
Crimson"
Good work in the trying for money and more money for Irish language schools, Tis' always in Season for that.

This spring I planted 21 trees. It took a whole month. As I spent many days each week I enjoyed spending the day outside not being bothered by time but watching the day go by. Your entry yesterday reminded me of how that felt. Thanks and I can't wait for next spring to plant more. Here's to planting and watching them grow.

I enjoyed this article from Gerry.There should be more articles like this.Making people aware of the spirit of nature that they are part of.

People are more concerned about how much the beer is and who won the soccer. And this is sad.

The andersonstown news should continue to encourage people to get involved with nature and plant more trees and wild flowers.Walk among our glens and forests and reconnect with our true selves.

Is it true that Gerry is a Druid? Someone once told me he was. although Druids do have a long time learning the ways. I think its 21 years to become a Druid.

And Gerry would be too busy i guess for this.

Maybe he is a pagan?