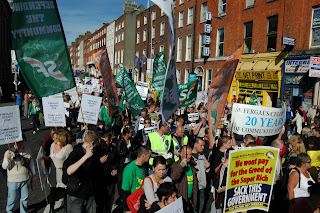 On Friday the Irish Congress of Trade Unions is holding a series of rallies to protest against planned or likely cuts in public spending arising out of Decembers budget by the Irish government and by the Health Minister, Michael McGimpsey in the north.

The public is being invited to participate and there is a serious effort being made to mobilize mass public support and solidarity for the events.

In the south the National Day of Protest is against the Fianna Fáil/Green Government’s disastrous approach to the economic crisis. The ICTU is arguing for a better and fairer way of tackling this crisis and protecting jobs and public services. It is part of ICTU’s ‘Get Up Stand Up’ Campaign. And the demonstrations come just a month before what is expected to be one of the most savage Budgets ever by a Dublin government.

The government has set its face against constructive proposals from the trade union movement, from Sinn Féin and others, and continues to do almost nothing to save jobs and create alternative employment. Its policies are primarily about protecting those within the golden circle in the banks, the developers and political elite who created the current mess in the first place.

People who have lost their jobs or had their working hours reduced, or who face the repossession of their homes, are rightly angry at the amount of public money that is being poured into NAMA while they are being threatened with cuts in dole payments and child benefit.

One issue which has not received the media attention it deserves is the decision last April by the government to cut the Christmas Social Welfare Bonus.

Most recipients are probably still unaware that there will be no bonus this year. This affects the most vulnerable social welfare recipients who depend on it to meet seasonal expenses. It is especially anti-children.

And this is just the most glaring of the cuts introduced so far, with worse to come in the December Budget. These cuts are socially damaging, but they also make no economic sense. Money spent on social welfare goes straight back into the economy because recipients spend it on their daily and weekly needs. They cannot afford to hoard or to invest it. So cutting social welfare will further depress the economy; it will also marginalise working families and the communities they are from.

The Government has clearly decided that the unemployed and other social welfare recipients are an easy target. They are not electorally organised and less well able to defend themselves. 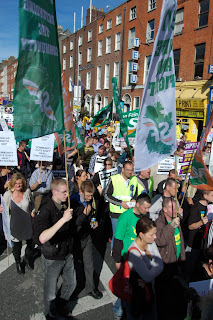 The ICTU National Day of Protest will provide an opportunity in at least eight major locations in the south - Dublin, Cork, Galway, Limerick, Waterford, Sligo, Tullamore, and Dundalk – for people to demonstrate their opposition to the policies of the government and to show that they do care for the most vulnerable in our society.

In the north the rallies are in Belfast, Derry, Magherafelt and Newry and the focus on Friday will very much be on planned cuts to the health service, including job losses, the closure of hospital beds and other proposals to slash health spending. The British Treasury is demanding ‘efficiency savings’ of £700 million over the next three years.

This is likely to mean the loss of an estimated 925 administrative jobs, 450 social services positions and more than 722 nursing jobs by 2011; Ambulance provision across the North may be cut by 70,000 hours; and mental health beds are also coming under pressure, with one of four wards for older people in Knockbracken Hospital in south Belfast being considered for closure.

Other actions that have been proposed include a greater reliance on a “skills mix” within the medical profession – that is, relying on less qualified health-care workers to carry out the work of nurses and midwives in order to cut costs.

The Belfast Trust also plans to ban staff overtime and the use of agency nurses. There is a push to cut patients stay in hospital to the shortest time possible, including those who have undergone surgery. Women's health professionals have expressed dismay at the Belfast Trust's plans that new mothers be released from hospital just six to 12 hours after they give birth.

The reality is that it will be the most disadvantaged, whose life expectancy is already significantly lower than others who will be most adversely affected by cuts.

So, it is time to choose what side you are on. For this blog there is no choice.

The ICTU is right. There is a better fairer way to organise our economy and society.

It is time to mobilise, agitate, educate and politicise for real change. Friday’s rallies are part of this necessary work. But they are not sufficient in themselves to bring about the changes that are required.

They are an important part of the fightback. That fightback has to continue beyond Friday.
Posted by Gerry Adams at 12:41 PM

Good man Gerry, the Left needs to get together on this demo!

Lisbon Treaty - Best out of three?

Only seems fair to me.

all together ones Get up Stand Up
Erin Go Bragh!

70,000 people bring Dublin to standstill in day of protest, what more could be said? We are not going to take it anymore!

I was a Waterford,
Huge turnout (good to see plenty from Sinn Fein there). But this alone will not deter the fat cats in Fainna Fail.
We need more protests on-going until the government resigns.