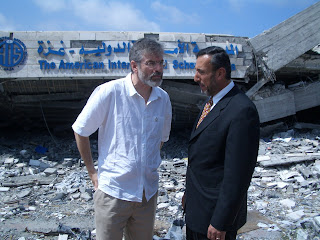 At the American International School which was destroyed in Israeli bombs: Sharhabeel Al Zaeem the Director

Nothing prepares you for the scene of destruction in Gaza. Even when you read before hand that 3500 homes were destroyed and 28,000 damaged. Even when you know all the statistics. 800 industries damaged. 10 schools destroyed, 204 damaged. 14 mosques destroyed, 38 damaged. The list goes on and on. But it makes you word blind.

Intellectually it may be possible to absorb some of this but it’s only when you are there that the impact of it all hits you. I had to fight back tears a few time. Particularly at the first stop on our schedule. A woman was sitting before an open fire in what was once her house. She was cooking. Girders and huge slabs of concrete formed a cave like structure above and around her. Her husband was dead. She was living on handouts. She used to live in a little village called Izbet Abd Rabo. Now she lives in a cave.

She is not on her own. 80 percent of Gazans are dependent on aid. Gaza is about the size of County Louth. 1.5 million people reside there. They are under siege. There has been little or no regeneration work done since the Israeli assault, because building materials are not allowed in.

500 trucks a day are needed to enter Gaza every day to maintain a sustainable level of economic activity, according to the World Bank and the European Union. Since the end of what the Israeli’s called ‘Operation Cast Lead’ only an average of 84 trucks enter every day.

We were there for two days. We met a huge amount of NGOs, women’s groups, community organisations, bankers, the private sector, all the university heads, other educationalists and all the political parties. 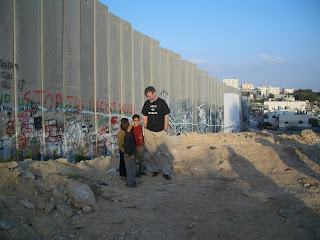 At 'The Wall' at Bethlehem with some local children

I am on my way back now in time for Belfast’s Easter Commemoration. So this blog is just touching base. I intend to return to this issue again. In fact I intend to write up a report for George Mitchell. He is due in Jerusalem on Monday.

I wish him well. But he has his work cut out. Of course George will not bring peace to the Middle East. That, like Ireland, can only be done by the people who live there. We met others on the Israeli side particularly at Sderot, a small town that has been targeted by rockets from Gaza. I was very impressed by the local people, particularly the women in the Resilience Centre. When I met Hamas I told them the rocket attacks should stop.

I also met other Israelis who understand that the people of Palestine and the people of Israel are destined to live side by side. They want to do this with mutual respect and tolerance. And they are right. That is the only way to build peace. Airstrikes are not the answer. Neither are rocket attacks. A peace settlement is needed and possible.

And the international community has a duty to create conditions to make this happen. So far they have behaved in a shameful way. Hopefully that will change. It has to. 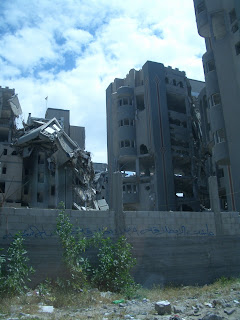 Happy Easter, Gerry. I thought about you as I walked with my group of progressive Christians on Good Friday. As we walk, we meditate upon things that Jesus cared about when he walked on this earth, so I thought about you and your efforts to facilitate peace in the Middle East, and prayed for the people of Gaza, for the strength and perserverence to do the hard work of peacemaking that lies ahead. I was taking video of the walk, but managed to meditate while running ahead to catch the walkers from different angles.

My video is at this link (if you watch, turn the sound way down--there was a city worker cutting weeds in the park where we gathered; also, the wind buffeted the microphone terribly):

Thanks, once again, for bringing news from Gaza, which is virtually absent from the U.S. media.

Gerry, article 7 of the Hamas charter calls for justice by killing the last Jew standing. The destruction of Israel is considered a religious duty for all Muslims. Suicide attacks on Israelis are glorified. The occupation is stated to be Israel's existence on any inch of what they consider Palestine, Tel Aviv and Haifa, as much as any part of the West Bank. I note you called for missile attacks on Israel to stop but did you have a chance to discuss the Hamas charter with the Hamas leader? You say that electoral mandates should entitle parties to legitimacy and a place at the table but in NI there was also the Mitchell principles of democracy and non violence. How close do you think Hamas would be to signing up to a version of these principles?

The poet Adrienne Rich wrote:War is bestowed like electroshock on the depressive nation; thousands of volts jolting the system, an artificial galvanizing, one effect of which is loss of memory.We must not have a loss of memory of what was in Irish History for History is Philosophy teaching by examples. Our duty is to lead by example, in this only exist the eyes of an observer.Every generation writes it's own histoy.
A wonderful post Gerry, thank-you

Steve, Hamas have a mandate a mandate which on their last elecion
people voted for them in huge numbers Article 7 or not.Democracy is no good without Justice,and it is lacking in the Middle East.On the subject of democracy Bush said he would support the results in the last election, but then changed his mind when Hamas won.
I am not a supporter of Hamas,Don't have much time for these religous parties, but the peolpe call the shots

Fair play to you Gerry for going over there and committing SF to try to help in whatever it can. Your descriptions of your trip were very powerful. You must be so tired - only back and then you had to speak the next day for an Easter event. I hope that you have had or will get some rest soon as you deserve it.

Interesting report- although Gaza is no longer the main thing in the international news we should not forget the suffering of the people of Palestine.
The new right wing government in Israel is worrying as well.
Just finished reading A Divided Paradise by David Lynch which is a really interesting look at the issue from an Irish perspective - because of the work of activists in Ireland, there is some great support for the Palestinian people here on the island- and that is something we can be proud of.

I happen to agree with an 'eye for an eye' because that response will eventually leave a level playing field. Then if they haven't learned, the (blind) participants will progress to become toothless and so on until someone learns. Even the 'dumb' animals have worked out that fighting is futile and shows of virility (bird song, plumage, etc) have replaced same.

Can democracy evolve, progress & function in a region where the word equality is and may always be impossible because of the deep predujice that exists in deeply rooted religious doctrine? Where violence is mandated and glorified as part of one's duty to praise whichever form of diety you follow?
As long as this fervor overshadows and commands it's people, and is deeply rooted in the communities, democracy cannot happen.
Hopefully, a compromise of mutual need and benefit can overcome this.
There needs to be a deeper understanding from the international community that you cannot force countries in the Middle East to conform to our standards of democracy, I don't think the same principles that help to form our own democratic systems can be applied.

Maybe, because a person such as yourself, who's people have experienced generations of similar predujice and suppression of culture can bring a new perspective to these governments, and with that, help guide them to peace.