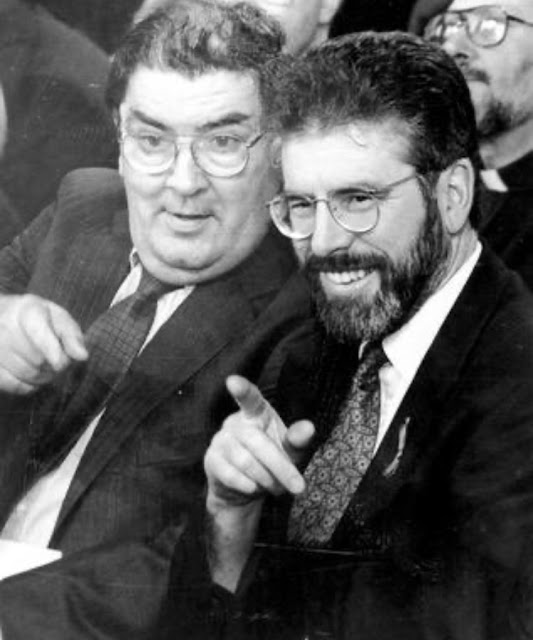 The death of John Hume is a huge loss for the Irish people but especially for his wife, his life partner and confidant, Pat and their family. My thoughts and prayers are with them.

During the years of conflict one of the tactics deployed by the British and Irish governments was that no one should talk to republicans. This British-led strategy was premised on an approach, developed through years of bitter colonial wars, that the objective must always be to defeat the enemy. For successive British governments that meant the use of extensive repressive legislation; a compliant judiciary and media; torture; shoot-to-kill actions; counter-gangs (UDA and UVF); and the demonising of that enemy. The Irish political and media establishment – with a very few honourable exceptions - bought into this Self serving stupidity.

In the late 1970s and early 1980s I publicly and repeatedly said that the politics of condemnation would achieve nothing. What was needed was the creation of an alternative unarmed strategy. Republicans were thinking, intelligent people who believed that armed struggle, in the context that existed then, was the only means by which real political change could be achieved. If that was to change then a realistic alternative was needed. Establish that and other possibilities became feasible. That was the essence of the argument I was putting.

As a result of conversations I was having at the time with Fr. Des Wilson and Fr. Alex Reid we tried to engage with the Catholic Hierarchy, the governments, and other parties to tease out what this alternative process might look like.

Regrettably, with the exception of Archbishop, later Cardinal Tomás Ó Fiaich, they weren’t for talking. The establishments were committed to their approach which was to defeat republicans. Sinn Féin’s early electoral successes in the 1982 Assembly election, in the 1983 Westminster election and in the local government elections of 1985 only served to reinforce this inflexible stance by the political and media establishments. Anything less than the defeat of Irish republicanism was anathema to them. So was dialogue.

In an attempt to open up a debate Fr. Reid wrote a paper in July 1985 in which he sought to identify the military and political conditions in which those republicans who were engaged in armed struggle would examine an alternative. His focus was on getting agreement between the nationalist parties around a united policy of aims and methods for solving the conflict.

He laboriously handwrote copies of this proposal and posted it off. He eventually spoke to the SDLP Deputy Leader Seamus Mallon about meeting with me. At first Mr. Mallon indicated a willingness to consider this but as time passed Fr. Reid suggested to Mallon that he was thinking of approaching John Hume. Mallon told him not to and to give it another few weeks. Meetings that were arranged were then cancelled. The British and Irish governments signed the Anglo-Irish Agreement in November 85 and in Westminster by-elections in early 1986 Seamus Mallon won the Newry and Mourne seat. In March Mr  Mallon told the Sagart (Fr. Reid) that he would not meet me. 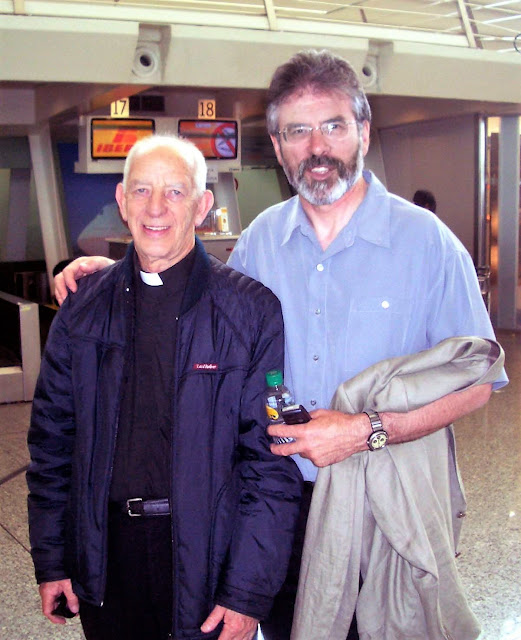 I bumped into the Sagart in the airport in the Basque country as he returned from his efforts for peace in that place.

This then was the background to the Sagart’s decision to write directly to John Hume on 19 May 1986. In a long letter, he set out his pastoral and moral obligations for writing. He wrote about our conversations and of our commitment to finding an alternative to conflict and gave John a real sense of what that alternative might be.

The Sagart went to and fro between us for a short time and eventually we arranged to meet in September. Our meeting was friendly and constructive. I put to John my belief that we needed to build a broad alliance of nationalist parties, or at least a consensus among us, to press the British into setting aside the 1920 Government of Ireland Act.John phoned Clonard Monastery the next day and he and the Sagart, along with Fr. Seamus Enright and Fr. Reynolds met on 21 May. John told the three priests that he would co-operate with them. He told them that he agreed in principle with their efforts to create a ‘political alternative to armed struggle through the process of dialogue between the parties and especially between Sinn Féin and the SDLP'.

I thought it was a good first meeting. While we had different political positions I found John very down to earth and easy to talk to. Both of us agreed to go off and reflect on what had been said. I agreed to relay our discussions back to the IRA and he said he would try to establish whether the British government would be prepared to say the sort of things I had suggested would be helpful. Looking back now I still find it hard to believe that the process of dialogue took as long as it did. That was 1986. It took another 12 years to get to the Good Friday Agreement.

In March 1988 the first of a series of leadership meetings between the SDLP and Sinn Fein took place. While some progress was made there remained significant gaps between us. The talks ended in September. Nonetheless John and I weren’t for giving up. In the midst of atrocities by all sides, and the perpetual political crisis that is the North, John and I continued to talk quietly.

At Easter 1993 the story of our meetings broke in the media. There was a storm of protest, condemnation, and vitriol almost all aimed at John. The Irish and British political and media establishments were outraged by John’s impertinence in breaking the consensus position of refusing to speak to Republicans. Sections of the Dublin based media was especially vitriolic toward John. Their attacks were personal, political and often just abusive. The Independent Group of Newspapers led the charge. Day after day, week after week thousands of words were written about John in the most hurtful, cruel, and spiteful manner.

I know that he found much of this very difficult. He was especially concerned at the impact on his family. But he refused to be put off course.

One of John’s great strengths was his dogged determination to see a thing through. He was convinced, as I was, that we were both very serious and genuine about finding an alternative to armed actions. Our shared objective was to agree a way forward that would see conflict ended for good.

Unlike those who were condemning him John did not live in a bubble divorced from ordinary people. He was a proud son of Derry who was deeply connected with his community in ways that his critics could never be. He knew many republican families – they were his neighbours. Although he fundamentally disagreed with the IRA, and was opposed to their actions, he knew that republicans were not criminals or gangsters but serious people who believed in what they were doing. He and I were trying to find another way forward.

John also faced criticism from within his own party. Eddie McGrady MP once said: “Terrorism will not be defeated by giving Sinn Féin a leg-up from the gutter.”  This fitted with the belief by some that he helped Sinn Féin at the cost of the SDLP. None of that is true. The reality is that Sinn Féin was fit for purpose following the Good Friday Agreement. The SDLP without John Hume was not.

Over the 12 years of our conversations, both secret and public, I got to know John well. At his best he had an instinctive affinity for people. Our conversations were never combative. He listened attentively to my opinions while ably arguing his own views when we disagreed. We both came to believe in each other’s commitment to the task we had set ourselves.  John Hume made a historic contribution to Ireland and to the future of our island. We are all the better for his leadership. John was also a good singer. One of my abiding memories is the two of us at my first White House St. Patrick’s Day event in 1995 singing ‘The Town I love so well’ about his native city of Derry. Together we cleared the building. 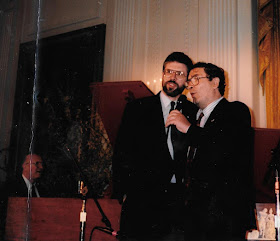 Singing in the White House

His wife Pat also deserves great credit. She was John’s mainstay, his life partner and constant adviser and supporter. She always made me welcome. Father Alex often told me that Pat was the biggest influence on John and he often talked to her about our process. I thank her for all she has done. Mó comhbhrón lei agus a clann. Agus leis an SDLP.

John’s contribution to Irish politics cannot be underestimated. When others talked endlessly about peace John grasped the challenge and helped make peace happen. 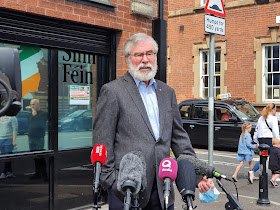 Speaking to the media after the death of John