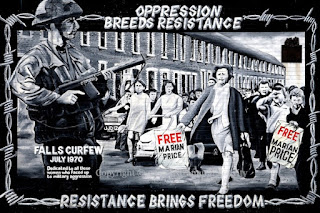 The Falls Curfew 50 years ago last weekend was a tipping point in modern Irish history.. The previous August (1969) unionist mobs had burned out hundreds of nationalist homes in west and north Belfast, killed and maimed, and forced thousands of families to become refugees living in schools, or with friends and family, strangers who opened their doors for them, or in camps across the border established by the Irish government. The British Army were on the streets. Some nationalists welcomed them as an alternative to the violence of the RUC, B Specials and the unionist gangs. This columnist was not one of those.

Two events changed that perspective. The first was the attack on 27 June 1970 by the UVF and others on the nationalist enclave of the Short Strand in East Belfast. Following the events of August 1969 there had been widespread criticism of the IRAs failure to defend nationalist areas. There was a resulting split in republican ranks over this and political differences about how republicans should respond to the growing crisis in the North.

When armed unionists attacked the Strand the British Army failed to intervene to protect the area. On the contrary newly released British Army logs from the period reveal that British soldiers fired 30 CS gas canisters into the grounds of St. Mathew’s Church which was the target of the unionist attack and the principal defence position of a small number of IRA volunteers and members of the local Citizens’ Defence Committee who were protecting the church.

The successful defence of the Strand was for many people evidence that the (Provisional) IRA was prepared to defend them and it boosted support for and confidence in the IRA. It also reinforced a growing unease among many nationalists that the real purpose of the British Army was to defend the Unionist state and the status quo.

Six days later the reality of the British military as an occupation force was exposed. It began with a search by British soldiers of a house in Balkan Street in the Falls area. Weapons belonging to the Official IRA were uncovered. Local residents were fearful that the actions of the British Army would leave their area defenceless again as it had been the previous August. There was anger. A confrontation between local women and the Black Watch Regiment took place and some young people in Albert Street attacked the soldiers with stones and petrol bombs.

In his book ‘The British Army in Northern Ireland’ British Army Colonel Mike Dewar – who had served in Cyprus and Borneo during the 1960s and in the North in the 1970s - described the approach of the British Army commander General Freeland. Dewar wrote: “Not surprisingly General Freeland was not prepared to let the IRA get away with it. He decided a show of force was needed and that the Falls had to be brought back under control.”

Over three thousand British soldiers, with the full panoply of armoured vehicles, including whippets and tanks, sealed off the Falls area from Divis Flats to the Grosvenor Road to Durham Street. Locked within the densely packed terraced streets several thousand men, women and children came under sustained attack by one of the world’s foremost military powers. 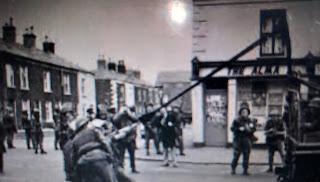 Slingshots were used to fire hundreds of ten inch long canisters of CS gas into the district. Some smashed their way through roofs into homes and the choking clouds of gas penetrated into houses through doors and windows.  Hundreds of homes were raided by British troops who broke through doors and windows, destroyed furniture, ripped out fireplaces, and pulled down ceilings and walls.

From helicopters hovering over the rooftops, loudspeakers broadcast a message of war, declaring a curfew which confined the local residents to their homes for an indefinite period. The Brits killed William Burns (54) at the front door of his Falls Road home. They shot another man Patrick Elliman (62) close to his home in Marchioness Street; he died seven days later. They shot and killed an Zbigniew Uglik aged 24 a English/Polish photographer, who was visiting from London, and Charles O’Neill aged 36 who was deliberately crushed to death by an armoured car. Dozens more were injured in the British army assault.

It was for the people of that small area a terrifying experience. The IRA had by now split into the Officials and Provisionals as they were popularly known. The Provisional unit in the Falls was much smaller than the Official unit. Both groups fought back, separately against the British forces. Cumann na mBan volunteers and Na Fianna Éireann were also active. This was the first armed action by D Company and the largest armed engagement between republican and British forces since the Black and Tan war. Thousands of rounds were fired and 300 local people were arrested. To add insult to injury as the streets were emptied of people the British Army brought two Unionist Ministers, John Brooke and William Long, through the area in armoured vehicles. 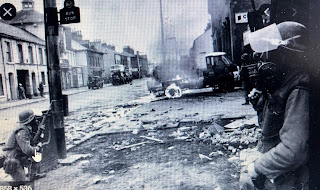 Accounts of what was happening quickly spread throughout nationalist west Belfast. Máire Drumm decided that something had to be done to help the besieged families. Word was quickly spread that a women’s march was to take place. Their aim was to break the military blockade surrounding the Falls and to bring bread and milk and food to the families trapped in their homes. The march of mothers began in Andersonstown and as it moved down the Falls Road women from Turf Lodge, Ballymurphy, Springhill, the Whiterock, St. James, Beechmount and Iveagh joined it. Many were pushing prams and some had young children by the hand.

When it finally reached the junction of the Falls Road and the Grosvenor Road where British troops had stretched rolls of barbed wire across the road, there were about three thousand women. Máire Drumm demanded that the wire be removed. The Brits refused and the women pulled it aside. They walked into the area. British soldiers tried in vain to stop them. There is old black and white film which shows hundreds of women proudly and defiantly brushing armed British soldiers aside. 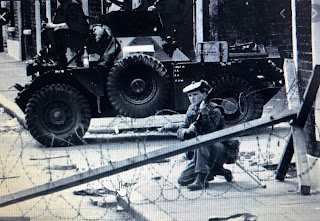 Lily Fitzsimmons from Turf Lodge, later a Sinn Fein Councillor, was one of those who broke the curfew. She described it:

“It was one of the greatest days of women’s solidarity that I can remember. The soldiers didn’t know what hit them they were literally overwhelmed by a sea of determined women. The people who had been imprisoned in their homes for three days were all cheering. You just felt like crying with emotion and many did.”

The Falls Curfew was a turning point. The sight of thousands of women, defiantly and courageously brushing aside heavily armed troops in defence of their community, encouraged increasing numbers of women to get involved in the struggle for freedom.

In addition whatever ambivalence or uncertainty that might have existed among some nationalists about the role of the British Army was now gone. It was clearly an army of military occupation, in support of a unionist regime and British establishment.

In the years that followed the lessons of post Second World War colonial wars fought by Britain in Aden, Kenya and Cyprus, Palestine and Borneo and many other former British colonies were brought to bear in the North of Ireland. Counter-insurgency laws, strategies and the creation of counter-gangs and state collusion with death squads became the norm. The alienation of most nationalists from the Stormont regime and the British state grew apace.

Nowadays the Falls curfew is a memory for some of us, history for others. Much has changed since then but the people of the Falls remain. Unconquered, optimistic and as strong as ever.