Government U Turn a Victory for People Power

The leaders of the 1916 Rising were identified for Court Martial and Execution by the RIC
Last week the Irish government announced a programme of centenary commemorations for 1920, and the events that year which saw an escalation in the fighting between republican forces and the various British armed agencies – the Royal Irish Constabulary (RIC), the Dublin Metropolitan Police (DMP), the Black and Tans, the Auxiliaries and the British Army. Much of the programme will be centred around Cork which witnessed many of the events of that year.
1920 saw the killing of Tomás MacCurtáin and the death on hunger strike of Terence MacSwiney, both Lord Mayors of the City. Other centenary events to be commemorated include the execution of Kevin Barry, Bloody Sunday in Croke Park in November 1920, the Mutiny in India by the Connaught Rangers, and there will be some support for reconciliation projects in the North.
However the decision by the government to hold a commemoration on January 17th for those who served in the Royal Irish Constabulary and the Dublin Metropolitan Police prior to Irish independence, caused a public outcry which has forced the government to announce a deferral of the commemoration.
The attempt by the government to try and separate out the role of the RIC and DMP prior to 1919, and their actions during 1919-21 Tan War, was disingenuous and fooled no one. It ignored the role of both paramilitary forces in the nineteenth and early twentieth century in defending the British colonial system in Ireland and in the violent oppression of Irish citizens.
No one should be surprised by the government’s attempt to hold this commemoration. It is symptomatic of an Irish establishment which is embarrassed by the revolutionary period in Irish history. Remember the disgraceful video used by the Government the launch the centenary of 1916 events. The 1916 leaders were not even mentioned. The Government clearly planned for an anemic dishonest version of the Rising. Popular opinion ensured that this did not happen. The majority of Irish people are proud of the revolutionary period. This showed in the multitude of spontaneous local and national events organised across Ireland and abroad.  And numerous publications. So the Government and Fianna Fáil leadership were forced to shift their position. Or at least their posture.
This dishonest stance was repeated by the Minister for Justice Charlie Flanagan who last September attended a commemoration for RIC members killed by the IRA during the Tan War. At that time Minister Flanagan described the RIC as “doing their job. They were murdered in the line of duty. They were doing what police officers do. As they saw it they were protecting communities from harm. They were maintaining the rule of law. These are fundamental to police services everywhere.”
The historical reality of course was very different. The RIC and DMP were not protecting communities from harm. They were inflicting harm. The rule of law these two paramilitary forces were maintaining and defending was one designed by a British colonial system seeking to defend British interests in Ireland, and in particular the interests of its landlord and business class. 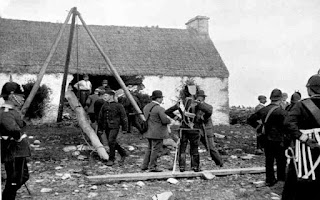 When families were being forcibly evicted from their homes during the Great Hunger, and millions more were forced to flee to the USA, Canada, Australia in the decades afterward, it was the RIC which was the paramilitary enforcer of these British policies. The many images of families being evicted from their homes, often with battering rams, show RIC members in attendance.

Throughout the 19th and early 20th centuries British rule was only possible because of a succession of coercion laws which the RIC and DMP enforced. In Dublin thousands were evicted from overcrowded tenements because they couldn’t afford the inflated rents. 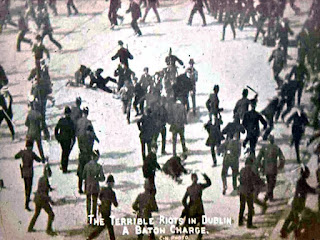 When the Dublin Lock-out took place in 1913 it was the Dublin Metropolitan Police and RIC that enforced the will of the bosses.
Early in the strike two workers, James Nolan and John Byrne were killed by the RIC. On 31 August 1913 Dublin Castle banned a mass meeting in O’Connell Street and the DMP and RIC savagely attacked the thousands who defied the ban on Ireland’s first Bloody Sunday. Between 400 and 600 people were injured in baton charges.One consequence of this was the formation of the Irish Citizen Army to defend workers against assaults from the Dublin Metropolitan Police. 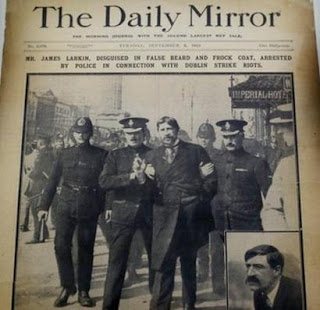 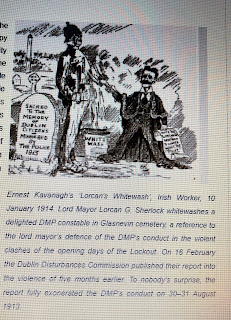 After the Easter Rising in 1916 the RIC and DMP were to the fore in defending Britain’s Irish policies, including the use of martial law and internment when it was introduced in May 1918. They were integral to imposing Britain’s paramilitary regime in Ireland.
While there may have been some among them who wished to be police officers neither organisation was a police service. No doubt there were decent officers in their ranks and their families have the right pay tribute to them. But for the state to commemorate these organisations is wrong. Along with the Black and Tans and the Auxiliaries, the Royal Irish Constabulary and Dublin Metropolitan Police were part and parcel of Britain’s counter insurgency strategy in Ireland and its campaign of terror against the Irish people. They killed citizens and tortured detainees. They imposed a brutal regime of violence. As a consequence the RIC and DMP were feared and distrusted and rejected by the communities they purported to serve. They were also rejected by those elected to the Dáil in 1918.
In April 10,1919 Eamon De Valera, among other speakers in Dáil Éireann, declared that the RIC were “no ordinary civil force, as police are in other countries. The RIC, unlike any police force in the world, is a military body armed with rifle and bayonet and revolver as well as baton.... they are spies in our midst.”
Eoin O Neill said; “The police in Ireland are a force of traitors and the police in Ireland are a force of perjurers’
The Taoiseach and Minister Flanagan’s disrespectful revisionism of the Irish people’s history of struggle for freedom does a grave disservice to those who were part of that struggle. There will be commemorations to remember important events in 1920. That is appropriate. But the Government also wanted us to commemorate the RIC whose members participated in many of those same events. The RIC took part in the attack on innocent civilians on Bloody Sunday at Croke Park. It was an RIC squad which murdered Cork Lord Mayor Tomás MacCurtain. And it should not be forgotten that it was G Division of the RIC which was responsible for identifying the leaders of the 1916 who were to be court martialed and executed. Are we now expected to be neutral about this? Or like Minister Flanagan to assert that, “They were doing what police officers do’.
The Government must go beyond deferral and scrap any plan now or in the future to commemorate the role of the RIC and the DMP. The shallowness and opportunism of their position on these events has been exposed. So has the posturing of the Fianna Fáil Leader.
The Government’s lack of respect for the courage and sacrifice of those who fought for Irish freedom has also been highlighted. Their U turn is a great victory for people power. The widespread popular outrage at their stupidity and shoneenism is uplifting and proof yet again that the spirit of genuine patriotism and national pride is alive and well.