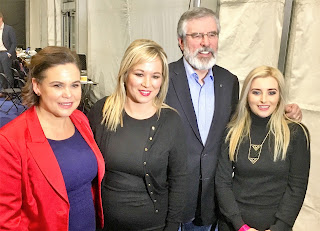 Last week, just before polling day, I wrote in this column; ‘every election is important. But some have a historic significance that resonates for years. This is one of those.’ And it was, and it is. If ever citizens needed proof of the power and the importance of their VOTE it was this election. The outcome has been variously described by political commentators, the media, and most of the participants as a ‘watershed election’, ‘carnage’, ‘shocking’, ‘remarkable’ and ‘significant’.
What is indisputable is that the Assembly election has brought about a seismic change in northern politics and in politics on this island. The long term consequences of this are potentially enormous. To understand why we need to look briefly at the historical context.
100 years ago next year, in December 1918, following the end of the First World War, a general election was held in Britain and Ireland. It was the first opportunity for people on this island to pass judgment on the Easter Rising of 1916 and the pre-war efforts to partition the island. In the nine counties of Ulster Unionists won 265,111 votes. Nationalists took 177,557 votes.
For Unionists that was too narrow a majority, especially given that Donegal, Cavan and Monaghan had solid nationalist majorities. So, the 70,000 unionists living in those three counties were abandoned to the new 26 county Free State. The six counties, with their 66% Unionist majority were deemed by the Unionist leadership as a safer geographical area to hold. They would have, they believed a permanent majority.
With numbers on their side, Unionism set about reinforcing their domination by gerrymandering electoral districts and imposing voting restrictions that reduced the nationalist vote. As a result, unionism dominated northern politics for decades. In 1921 the Stormont Parliament had 52 members. 40 were unionist. They represented 77% of the Parliament. That remained largely unchanged for most of that Parliament’s existence. Almost 50 years later in 1969 Unionism held 39 seats or 75%. Shift forward almost 30 years to 1998 and in the Assembly election of that year the unionist percentage share of seats had begun to decline. Out of 108 seats Unionism held 58 or 54% of the Assembly seats. 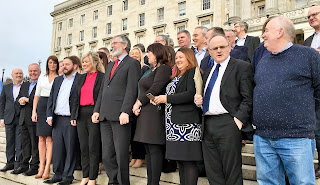 The 2017 Assembly election enabled a transformation unimaginable to the founders of the Northern state. This election has the Unionists back on 40 but now in an Assembly of 90 seats. They have 44% of the Assembly representation. 39 seats are held by nationalists and 11 others. Unionist majority domination of the local Assembly has come to an end. So too is the belief in a perpetual unionist majority in the North. The gap between Sinn Féin and the DUP has been reduced to one seat and only 1,168 votes.
Of course political unionism will try to regroup. There will be lots of talk of unionist unity. The sectarian card may be played yet again. So, the gains made for the future by last week’s vote have to be consolidated and increased in future contests. They have to be built upon.This requires a progressive agenda.
The reality is that this result has been taking shape in the demographic twists and turns of the northern population for decades. It became especially evident five years ago when in December 2012 the census results for 2011 were published. Speaking at a United Ireland conference in the Mansion House in January I reminded the audience that on that occasion and for the first time in a census the statisticians asked about identity - setting to one side the sectarian labels of Catholic and Protestant.
48% of citizens in the North stated that they had a British only identity or a British/Irish identity. For the first time those self-identifying as British were less than 50% of the population.
A quarter of those who filled in their census forms (25%) stated that they had an Irish only identity, and just over a fifth (21%) had a Northern Irish only identity. That means that 46% of citizens in the North have some form of Irish only identity. This was a quantum change in the political demographics of the six counties.
Attitudes are also changing on other important issues. More and more people support Marriage equality for Gay or Lesbian citizens. There’s also widespread support for a Bill of Rights and an Irish Language Act. Equality is increasing embraced as a concept on which to build decent living standards.
More people want to see women having access to terminations of pregnancy on compassionate grounds and in limited circumstances.  In other words, there is an increasing desire for a more compassionate, caring and tolerant society and it involves people from all political backgrounds particularly, but not exclusively young people. 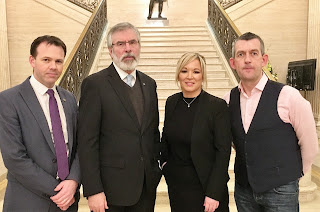 Mise agus John Brady TD, Michelle O'Neill and Maurice Quinlivan TD
Of course the DUP is opposed to equality. But they no longer rule the roost. We must respect their mandate. But they also have to respect all the other mandates. All the other opinions. That requires an entirely new dispensation. Creating that is the biggest challenge of all.
Brexit is the backcloth against which some of these changes are occurring. It has serious implications for human rights and for the Good Friday Agreement. In the farming sector, unionist farmers know that their best interests will not be served by Brexit despite the DUP support for this. Business people and the community and voluntary sector share these concerns.
What does all of this mean? Can we simply reduce the divisions in our society down to statistics and graphs?
I don’t believe we can. Whatever the outworking of demographics the responsibility of political leaders must be to agree policies and programmes that reduce divisions, end sectarianism, build real equality for citizens and improve the daily lives of all our citizens. There is the potential for a progressive consensus among parties like Sinn Féin, the SDLP, Alliance, the Greens, People before Profit, and individual MLAs who have advocated equality measures.
We have to be prepared to set aside party differences and unite for positive change, recognising and valuing the differences that shape our society. That means progress on Acht na Gaeilge and marriage equality and other matters important to citizens, including anti-poverty measures, and social and economic issues.
Parity of esteem for all our traditions is so vital to our future.
This week has seen the commencement of negotiations. There is a danger that citizens who engaged in the election will become disenchanted if progress is not made or if they believe that the outcome will be another fudge. Nor is it good enough for James Brokenshire to pose as a neutral guarantor of the Good Friday Agreement or for the Minister for Foreign Affairs Charlie Flanagan to claim that it’s up to the northern parties to do the heavy lifting. James Brokenshire is not neutral. He is partisan and a player, as evidenced in his refusal to fund legacy inquests. And Charlie Flanagan and the Taoiseach have a responsibility to stand up to the British government and demand that it honour all of the commitments it has made since 1998.
The Assembly election presents all of us with a new opportunity to do things differently. I believe absolutely that Irish unity is the best outcome for all the people of this island. Sinn Féin will work to achieve that. But in the meantime there is a need to co operate with other progressives to create real changes in peoples’ lives based on everyones right to equality. That has to be our overarching strategy in the time ahead.


But as we do this work we have to understand that further demographic changes are inevitable.  We also have to understand the consequences of Brexit. That means we need a discourse on how we manage the transition from where we are now to an end of partition. And we need to do that now. 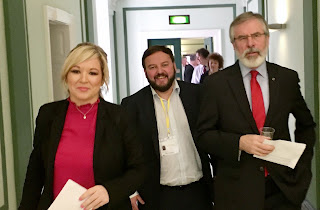