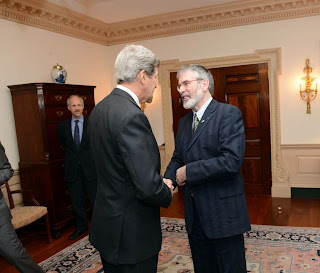 US Secretary of State John Kerry

This blog was written as I returned from the USA two weeks ago following a few hectic days marking St. Patrick's feast day. I get to travel a lot even when I don't feel like it. From the Meath East by-election to Washington DC is a tidy number of miles but there is a rhythm to stress free travelling which I follow now for years. The key is not to get stressed, to be on time and to be mindful that there is an end to every journey. It is also a good thing not to be overwhelmed by schedules  - especially Sinn Féin schedules. Go with the flow. And get a walk when you can as often as you can.

So from Belfast to Newark across the Atlantic in my sleep before solid ground welcomes my feet and the rest of me to the USA. A few train switches and then the almost three hours railway trek to DC. Nineteen hours later and collapse into bed in a downtown hotel room. Weather? Cold, wet and windy. Sinuses on a Tet offensive. Not enough duvets on bed. RG snoring. No way to spend Saint Patricks Day.

But next morning Friends of Sinn Féin and Joseph Smiths wonderful hospitality cheers us all. Here they have a Saint Patricks Week. And a jolly old week it is too. Busy. Our delegation is joined by Mary Lou. We are led by Rita O Hare.


We are early for our morning meeting with Secretary of State John Kerry so RG and I take a walk down to the corner. Set among holly and elm trees in the grounds of the National Academy of Sciences there sits a 12 foot bronze likeness of Albert Einstein. It’s a remarkable piece of sculpture of Einstein holding in his left hand a paper with the equations that marked his three most important scientific discoveries.


It’s then back to the State department for our meeting with Secretary Kerry. We talk about the peace process, the threats to it, the future, a border poll and the middle east. From there I’ts over to a series of briefings with our friends on Capitol Hill, to a fundraising lunch replete with some of the most powerful labour union leaders led by the fiery Terry O Sullivan, to a walk around the block and dinner in Bobby Vans, it is all go.

Ditto the next day. More briefings on the Hill. Met up with senior Congress members Richie Neal and Peter King and other stalwarts in Congress and the Senate. Then the Speakers Lunch where the Taoiseach and the President say their cupla focal and we dine on lamb and praties on a bed of green white and orange vegetables. Good straight words from the Taoiseach about the north. Delivery essential when he gets back. Martin Mc Guinness is there too. Alongside Peter Robinson. On the last leg of their long journey home from Latin America and the west coast of USA.

RG and I get a walk. The weather has changed for the better. Saint Patrick turned the stone. Big blue sky. lovely sunshine. almost summery. Visit Macey’s but buy nought. Can't find a book shop. Back to Capitol Hill to meet Senator Patrick Leahy and from there to the White House. 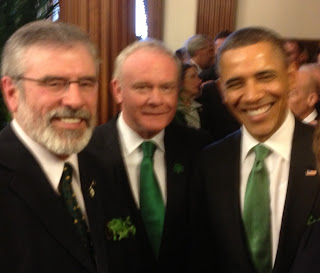 Almost missed speeches. Was settled in White House library browsing. But a nice woman in a uniform alerted me in a soft prairie drawl to Presidents remarks starting. He was very positive on immigration issues. Met lots of old friends from Ireland and USA. Delighted to see Matt Molloy from The Chieftans. Great ceoltoir and a sound man.

And so mission almost completed, we retire to Bobby Vans again for what is now our traditional Saint Patricks dinner courtesy of Joseph. Met some disabled Vietnam veterans. There are 31 million combat vets here. Made me think of Pete Seegers ‘Where Have All The Flowers Gone’? And so to bed.

And then we headed back to whence we came. Was it a good trip? Yes. We got to brief powerful and influential people on current state of the process of change back home. From Marian Price, Pat Finucane., Ballymurphy families, Border poll, to Undocumented Irish and the need for an end to sectarianism and segregation. And all the bits in between like the Bill of Rights and Acht na Gaeilge.

What was main message?

It's not over yet. Our journey continues. Lots to be done. And we need our friends in the USA to complete the journey with us.
Posted by Gerry Adams at 3:54 PM