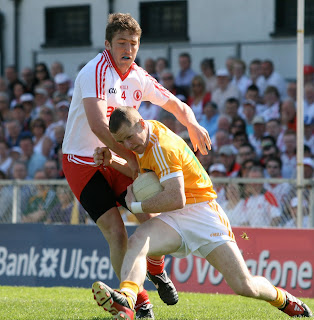 Your man and me went to last Sundays game in Casement. It was a great day out. The pitch was in great condition, the crowds were expectant, excited and colourful. The atmosphere was great. The new stadium, when it comes, will be a great venue for more great occasions.

Okay we lost. This blog would be happier if we won but you got to give it to Tír Éoghan. Too many people, including your man, were writing them off in advance of the game. You don’t write off Tír Éoghan like that. Especially against an Aontroim side which is still evolving, still a team – a very good team – but a team in transition with its best yet to come.

Last years success meant there was going to be a very high expectation among players and fans alike. That’s a good thing. Liam Bradley and his management team are doing a great job and we have some of the best players in the country playing for us. But Tír Éoghan have craft and experience. By the bucket load. And they used it.

So we can’t complain. They won the first half and in the second half we put them under great pressure. And maybe just maybe with a wee bit of luck we might have pulled it off. But we didn’t. They won, even if Muggsie’s goal was dodgey. Agus shin é. Well done to all our players.

The next game is the important one. The minors will also be disappointed but no matter. Both seniors and minors did us proud.

I met some of the Aontroim and Saint Galls lads the night before. When I was in Saint Finian’s,or maybe it was Saint Mary’s I was involved with Saint Galls. I was only a kid. Brother Leopold – the walking lamp post – dismissed me over an alleged instance of rowdy behaviour in the clubrooms which at that time were adjacent to Milltown cemetery.

Later when he found out that I wasn’t the culprit he apologised and asked me back. I remember that day well. It was during a hurling match in Casement. As your man recalls it I was having an indifferent game. My recollection is that I was Christy Ring-like. Anyway the good brother invited me back to Galls. But in those days I had principles. So I never did go back. Ah foolish youth! 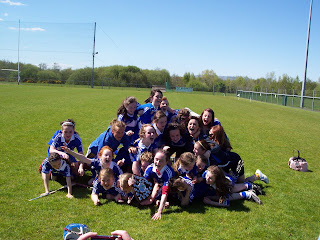 Talking of hurling, well camogie to be exact. Naomh Éoghan camogs had a great win at the Feile. By all accounts the game against Loughgiel was a cracker. According to my sources high Noon at Cargin saw Naomh Éoghan girls fight back to achieve the impossible and beat hot favourites Loughgiel by 4 points after starting the second half three points down.

However, the Naomh Éoghan fighting spirit paid off as Roxy took a quick early point and Captain Eimhear Costello slipped through a gaggle of Loughgiel defenders to blast home the goal which put St.Johns ahead.

There was no looking back after that as Niamh Adams blasted home from close range and Roxy followed up with two well struck goals and a point to leave Loughgiel in disbelief. The North Antrim girls fought back with four more points and a goal at the very end but a gritty team effort saw Naomh Éoghan girls through to their first ever County Féile championship and a big trip to Clare in June. 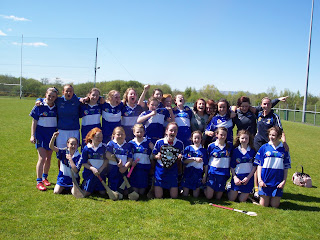 And finally our senior hurlers have a big game at the weekend against Offaly. The hurlers have been taking some hits recently but they have the ability to do better than they have managed so far. So they have our best wishes also. Hurling is still the best field game in the world. It is the poor second cousin of Gaelic sports mostly because more skill is required. On this your man and this blog are in agreement.

As he says ‘Any oul eejit cud kick a football. But striking a sloithar under pressure and at full speed that’s a different matter.’

I don’t know about the any oul eejit bit. Any oul eejit couldn’t get through the Tír Éoghan defenders. But then your man isn’t any oul eejit. He’s special. Or so he thinks. Sports are always interesting win or no win. There seems to be a level of politics in hurling, All involved in the game love hurling . Did you know you could bet on Irish hurling.? the sam would be true of politics.Cumann Iománaíochta Coláiste na Tríonóide is one of the oldest clubs in the history of GAA. Trinity College Hurley Club predates the G.A.A and their activities and attitudes in that time were important factors in stimulating Michael Cusack to initiate the establishment of An Cumann Lúthchleas Gael in 1884.
In the H-Blocks, I understand that one was risking a beating and solitary confinement in order to smuggle GAA results to news-starved comrades. The British state in Ireland traditionally and simplistically viewed the GAA as the sporting wing of militant nationalism.
Ambitious plans to continue the re-development of Casement Park would be given a huge financial injection if it were allowed to compete on a level playing field. I do believe the Andersonstown Road site has the potential to become a new focus for the cultural and sporting life of West Belfast.

I wonder why your man thinks he's special. Does he have any evidence to back this up. Or is he living in cloud cuckoo land.

I had two chances to play Gaelic games in my youth but I was, apparently, incapable of understanding what was going on around me and was dismissed from the field of play on both occasions.

With hindsight I can see that I was sub-consciously acting out my father's hatred of the GAA.